A federal lawsuit was filed today challenging the constitutionality of Mississippi’s law banning adoption by same-sex couples. Mississippi is the only state left in the nation that bans gay couples from adopting without regard for their qualifications as parents or the best interests of the child.

The case, Campaign for Southern Equality v. Mississippi Department of Human Services, was filed today in the U.S. District Court for the Southern District of Mississippi on behalf of four same-sex couples: Kari Lunsford and Tinora Sweeten-Lunsford, who are seeking to adopt a child; Brittany Rowell and Jessica Harbuck, also seeking to adopt; Donna Phillips and Janet Smith, parents to a young daughter; and Kathryn Garner and Susan Hrostowski, who have a 15-year-old son. Two organizations — the Campaign for Southern Equality and Family Equality Council — join the case as plaintiffs representing the LGBT families across Mississippi. 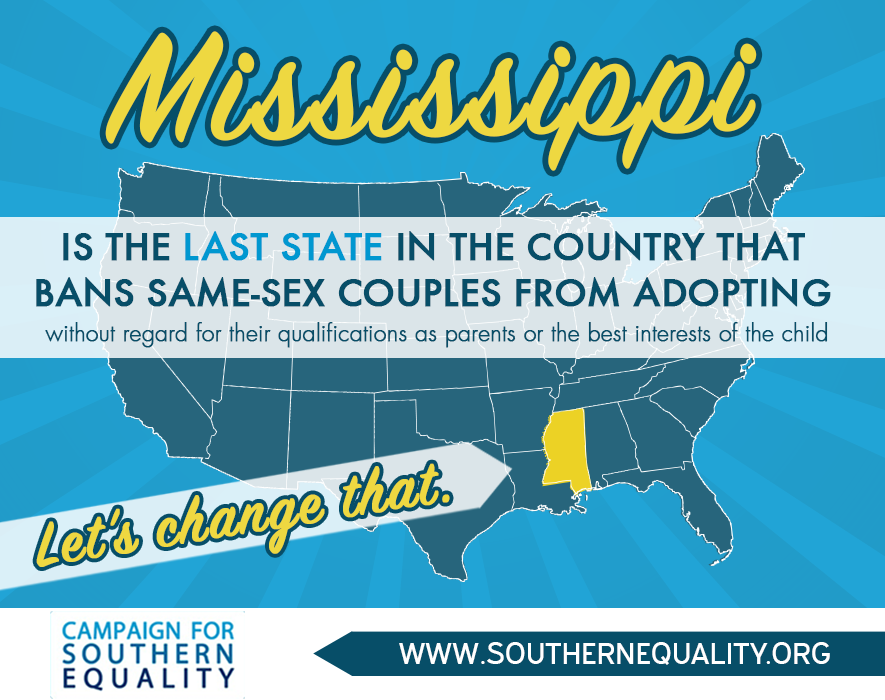 The full complaint can be read here.

“Mississippi’s ban on adoption by gay and lesbian couples blatantly discriminates against loving families, unfairly harms innocent children, and plainly cannot be reconciled with the constitutional guarantees of due process and equal protection as recently interpreted by the Supreme Court,” says lead counsel Roberta Kaplan.

There are currently approximately 100 children in Mississippi who are in foster care and legally available for adoption, but who have not been matched with parents who can adopt them.

Plaintiffs Brittany Rowell and Jessica Harbuck, who live in Jackson and are engaged to marry in January of 2016, add, “Like many other couples, we are looking into the future and how we want to start expanding our family. We feel compelled to adopt because the staggering statistics for children in foster care are daunting. We want to open our home to a child and make them feel safe, wanted, and loved. Every child deserves that. And we would be honored to be able to change the life of a child.” 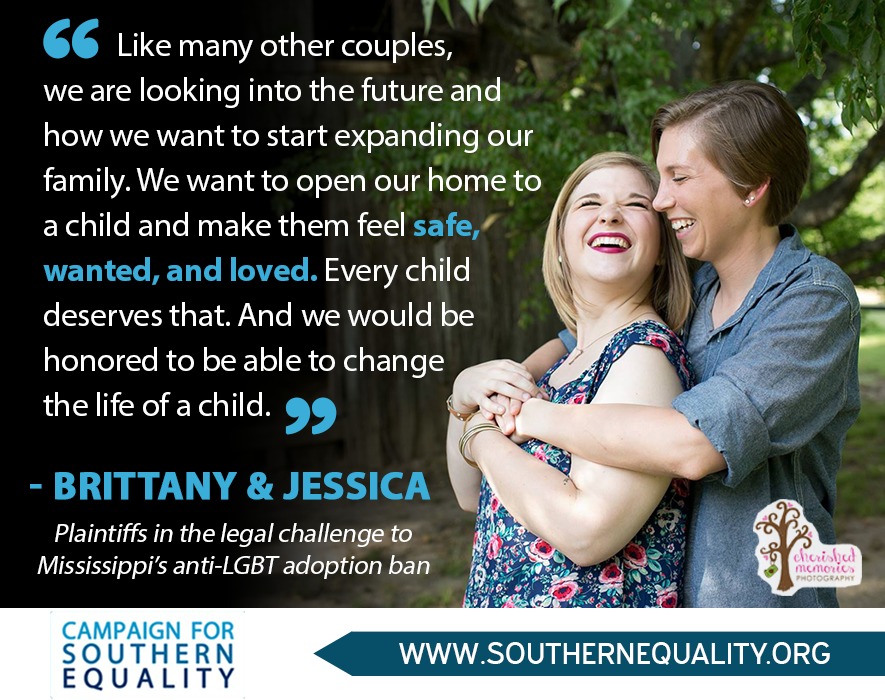 “Across Mississippi, there are same-sex couples like Brittany and Jessica who are ready and able to provide a loving, stable home to children and there are waiting children in Mississippi’s foster care system who desperately need a home. What stands between them is a discriminatory law that must be struck down. It’s time for Mississippi to treat LGBT families as equal in every area of the law — including the right to adopt,” says Rev. Jasmine Beach-Ferrara, Executive Director of the Campaign for Southern Equality, which has been advocating for LGBT equality across Mississippi since 2012 through public actions, public education campaigns and lawsuits.

Gabriel Blau, Executive Director of Family Equality Council, says: “The best interest of children must always be at the heart of family law. Mississippi’s statute disregards what is best for children, families, and America. This blatant discrimination hurts our families and treats them like second-class citizens. Mississippi has the highest rate of same-sex couples raising children in the country. All families — no matter in which state they make their home — deserve to be treated equally, and all children deserve to be protected by legal relationships with their parents.”

“The Mississippi Adoption Ban writes inequality into Mississippi law by requiring that married gay and lesbian couples be treated differently than all other married couples in Mississippi, unequivocally barring them from adoption without regard to their circumstances or qualifications as parents.  As a consequence, the equal dignity of hundreds of families and thousands of children in Mississippi is disrespected and the significant and concrete rights, benefits, and duties that come with legal parentage are denied.  The Mississippi Adoption Ban means that “thousands of . . . children [are] actually being raised in homes . . . [with] only one legal parent, not the two who want them.”  Matter of Jacob, 660 N.E.2d 397, 398 (N.Y. 1995).  The Mississippi Adoption Ban is an outdated relic of a time when the courts and legislatures believed that it was okay to discriminate against gay people simply because they are gay.  But under the Supreme Court’s decisions in Obergefell and Windsor, such discrimination against children because their parents happen to be gay is clearly unconstitutional.”