LGBTQ Charlotteans and supporters of the ordinance will gather for community event and media availability before City Council meeting. 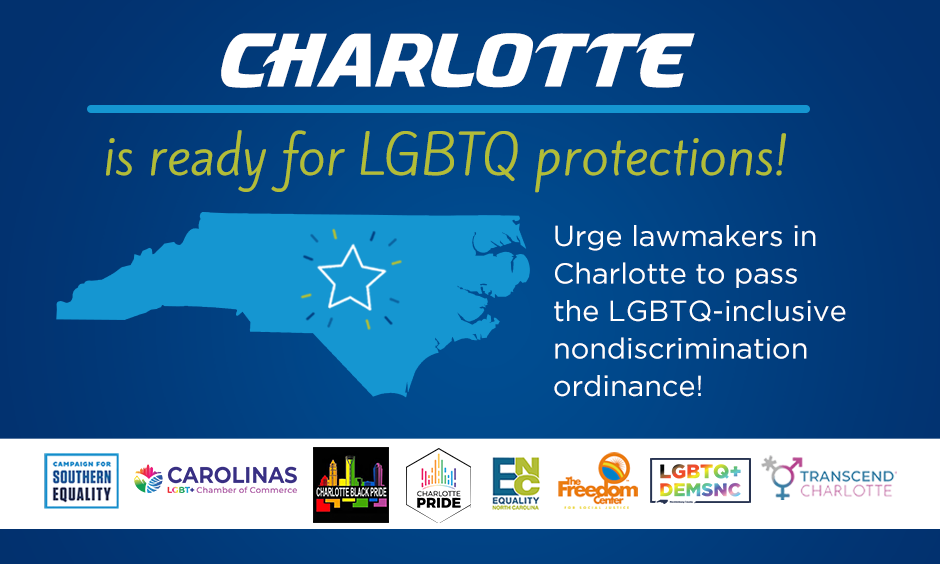 On Monday, August 2, the Charlotte City Council will begin discussions about a local ordinance that would establish clear protections from discrimination based on sexual orientation, gender identity, natural hairstyle, and more in key areas of life, including public spaces and private employment.

Monday’s meeting will include a presentation of the ordinance. Public comment will be heard on the ordinance on Monday, August 9. In the meantime, hundreds of supporters of LGBTQ equality are urging the City Council to vote yes on the ordinance. If adopted, it would be the tenth LGBTQ-inclusive nondiscrimination ordinance to pass in North Carolina in 2021.

“We are calling on City Council to finally include all Charlotteans in our city’s nondiscrimination protections. We know that Charlotte has become the second deadliest city in the U.S. for transgender and gender diverse people, especially trans women of color. It is time for Charlotte City Council to change this narrative and rebuild the reputation NC has created for itself from consistent legislative attacks on the trans community over the past five years. Trans folks have the right to live and thrive in Charlotte, free from discrimination, and City Council must pass an updated ordinance confirming those rights.”

“As a lifelong Charlottean, I know that this nondiscrimination ordinance is long overdue. For LGBTQ people – and for people like me who have faced discrimination and mistreatment because of our natural hair – the ordinance will help foster a more fair and free city. Its passage will tell transgender and nonbinary people that they are safe, affirm that people of every sexual orientation are welcome, and signal to Black and brown people that their natural hair is beautiful. It’s time that our city uphold dignity and equality for everyone.”

Through the NC is Ready for LGBTQ Protections campaign, led by Equality North Carolina and the Campaign for Southern Equality, a diverse array of voices has spoken out for LGBTQ protections at the local, state, and federal levels.  Learn more at www.ncisready.org.