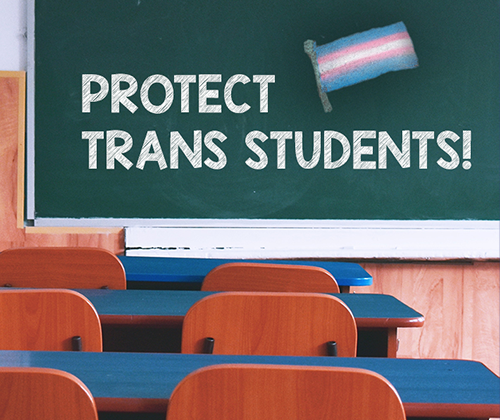 For the past 18 months, the Campaign for Southern Equality has requested that the NC Department of Public Instruction update the fields in PowerSchool, the student data information system, so that transgender students don’t have their trans status revealed without their permission when their legal name or gender is disclosed. Several school systems have been making similar requests since 2017 or before. Although NC DPI staff have been uniformly understanding and supportive, the changes have not been made. We have found these options are standard practice in other states that use PowerSchool.

Now, with the COVID-19 pandemic forcing a shift to at-home learning for 1.5 million students across North Carolina, dozens of online learning platforms, discussion groups, and other virtual systems are generating student usernames from the legal names that are listed in PowerSchool. If you are a North Carolina educator, parent or guardian, student, or concerned community member, please join us in urging NC DPI to update their PowerSchool system to the national standard and protect the privacy and safety of NC students. Thank you for adding your name to the letter below.

Thank you for your March 15 and March 23 letters to parents, caretakers and educators about the North Carolina schools’ response to the COVID-19 pandemic. We could not agree more that the safety and well-being of all of our students is a top priority that will require all of us working together to overcome challenges that may have seemed insurmountable in the past. This letter is about tackling one of these challenges and doing our best to support transgender students in North Carolina during this unprecedented shift for our school systems.

Since 2017 or before, school districts and nonprofits across the state have requested that the Department of Public Instruction update the state-mandated PowerSchool student information system so that it is no longer set up in a way that violates the safety and privacy of transgender students. Specifically, they have asked for ‘Legal Name’ fields separate from the ‘Name’ fields; for a ‘Legal Gender’ field separate from the ‘Gender’ field; and for the gender fields to include a ‘non-binary’ option in addition to ‘male’ and ‘female.’

Without these corrections in place, students who are transgender are at a constant risk of having their transgender identity revealed to others at school without their consent, which is a violation of the Federal Educational Rights and Privacy Act (FERPA) as well as state and district privacy policies. The privacy violation may occur through a teacher reading the attendance roster, other students seeing the name on an online test, an office worker running a report, or any number of other ways in which PowerSchool is used for student lists and records.

For most transgender students, being confronted with one’s birth name (referred to commonly in the trans community as one’s ‘dead name’) can trigger feelings of anxiety and dysphoria. When the disclosure is made public, they may fear for their safety as well. According to a 2017 GLSEN survey of LGBTQ students in North Carolina, 90% regularly hear anti-LGBTQ language in schools. Nearly 3 out 4 have experienced verbal harassment, 1 out of 3 have experienced physical harassment, and 14% have experienced a physical assault at school.

Other states that use PowerSchool have had their systems set up to protect the privacy of transgender students since 2015 or earlier. Many North Carolina schools and districts have been more than patient with NC DPI, putting in place time-intensive processes to manually correct rosters, lists and records where they can. Families and students have been forced to accept loss of privacy and other harms as students are confronted with their birth name, particularly in online testing and discussion forums. Many times their best coping strategy is to opt out, skipping the test or taking a zero grade for the online part of the course, rather than having their transgender status revealed.

But now our time has run out. As North Carolina schools shift to at-home learning in response to the COVID-19 pandemic, all of the online learning platforms, chat rooms, discussion forums, and virtual testing sites are generating student usernames, visible to other students and faculty, based on the legal name in PowerSchool. Across the state, students are finding out that their classmate Janelle was once named James, that Aaron used to be Emily, that Latisha was Lavon. It is impossible to describe the social, emotional, and psychological harms that this mass violation of privacy may cause.

We know how much local school systems have on their plates right now, and while we are encouraging educators to double-check and correct student usernames, a system-wide fix is far more efficient. One decision from your office, one system update, and 2,500 schools across the state will automatically have this problem solved.

And so, with the goal of keeping our students’ safety as a top priority, we urge you to:

Ultimately, these are issues of fundamental safety and privacy for our students, which we agree are of the highest importance and require us to work together in new ways. Thank you for your cooperation and prompt action.

Add Your Name to the Statement

Only your name and descriptor (Teacher, Parent, Counselor, etc.) will be published.