As attention turns to Georgia one week before a consequential U.S. Senate runoff, new research provides insights into health disparities and needs around HIV care and mental health. 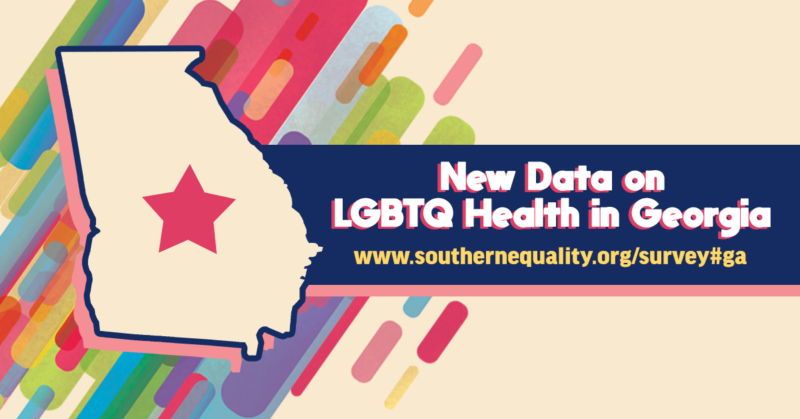 Today the Campaign for Southern Equality (CSE) and Western North Carolina Community Health Services (WNCCHS) released a new report about LGBTQ health disparities in Georgia, as a supplement to The Report of the 2019 Southern LGBTQ Health Survey.

Georgia is home to more than 425,000 LGBTQ adults. More than 350 LGBTQ people in Georgia and more than 5,600 people across the South took part in the 2019 Southern LGBTQ Health Survey – the largest sample ever of LGBTQ Southerners talking specifically about their health and healthcare. The report released today provides new insights into the health disparities that LGBTQ people in Georgia experience.

The publication of this supplement comes one week before two crucial run-off election races that will determine partisan control of the United States Senate. The Republican and Democratic candidates have markedly different records on LGBTQ issues and could strongly influence how Congress takes action on LGBTQ equity issues, including the Equality Act.

Key findings of this new report – which you can read here – include:

“LGBTQ people live across Georgia and deserve to have access to quality, affirming health care without leaving their hometowns. This report illustrates that we must improve the health experiences of LGBTQ people in Georgia, which will require change from the level of the local health clinic all the way to federal policy making.

“The most immediate and sweeping way to create the policy change we need is through action at the federal level, one reason why January 5’s U.S. Senate races are so critical. With one week left before the run-off election, we urge every candidate and all decision-makers in Georgia to examine this report and commit to working toward a Georgia where LGBTQ people can access quality care and are finally equal under the law.”

The authors of the 2019 Southern LGBTQ Health Survey Report are available for interviews.

Led by a team of LGBTQ Southerners, the Southern LGBTQ Health Survey was rooted in community-based research methods, including working with a team of Survey Ambassadors who spanned the region and who included a minister, a nightclub promoter, and grassroots leaders. The project is part of the Southern LGBTQ Health Initiative, a collaboration of CSE and WNCCHS to improve access to LGBTQ-friendly primary care, HIV care and support services across the South. In addition to community-based research, this initiative involves training primary care providers in affirming health care practices and providing direct funding to grassroots groups leading innovations in access to LGBTQ health care. The supplement’s primary authors are Abigail Bowen and Dr. Austin Johnson.

Access the Georgia state supplement for the Southern LGBTQ Health Survey – as well as the full report and executive summary in English and Spanish at https://southernequality.org/survey/#GA.

Based in Asheville, NC, the Campaign for Southern Equality works for full LGBTQ equality across the South. Our work is rooted in commitments to equity in race, gender and class. http://www.southernequality.org

Based in Asheville, NC, Western North Carolina Community Health Services is one of approximately 200 federally-qualified health centers located across the deep South, and has been providing culturally competent, high quality health care for over 20 years to lower income residents of Western North Carolina. http://www.wncchs.org/