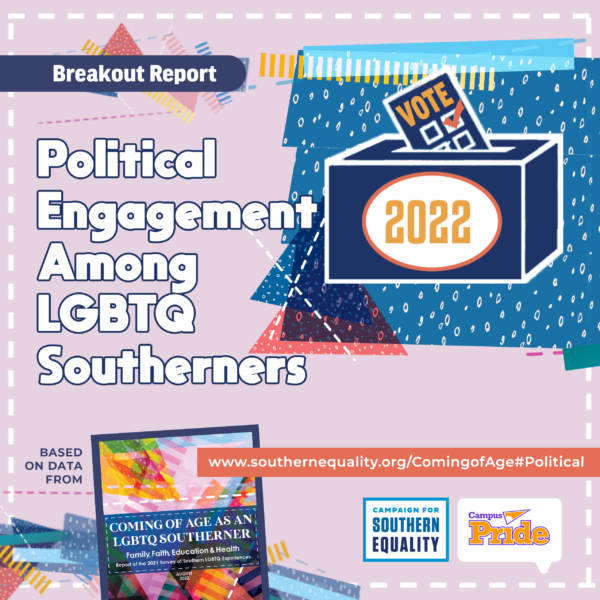 Today the Campaign for Southern Equality (CSE) and Campus Pride released a new report focused on LGBTQ Southerners’ voting behaviors and beliefs related to political engagement. The report is being released just a few days ahead of the 2022 Midterm Election, which could shape policy outcomes of the 2023 legislative session and the prospects for LGBTQ-inclusive legislation at the federal level.

The report highlights why political participation from LGBTQ Southerners is essential in increasing representation at all levels of government and building the political voice and will to achieve full legal equality. This breakout is a supplement to Coming of Age as an LGBTQ Southerner: Family, Faith, Education & Health, and relies on data from the 2021 Survey of Southern LGBTQ Experiences, a survey of 4,186 LGBTQ people who live in the South. The survey oversamples people in the 18-24 age range.

Key findings of the supplement – which you can read here – include:

“The South is home to roughly 3.6 million LGBTQ adults – more than in any other region. And along with our friends, family members, and neighbors, we have the power to elect our leaders who will advance our community’s policy priorities. These data are demonstrating two important truths: First, that LGBTQ Southerners are politically active, engaged, and aware – and second, that they feel their engagement does not have an impact on public officials. The truth is that elected officials all across the South must start listening to their LGBTQ constituents – because we are here, we are participating in the political system, and we are growing more powerful each year. Lawmakers need to stop pushing discriminatory measures and start protecting and respecting everyone they serve.”

Access this issue spotlight supplement of Coming of Age as an LGBTQ Southerner – as well as the full report – at www.southernequality.org/ComingofAgeSurvey#Political