Today, state legislators in North Carolina introduced a package of bills to advance dignity and equality lesbian, gay, bisexual, transgender, and queer (LGBTQ) people in North Carolina. The filing comes almost exactly five years after the unprecedented passage of HB2, which notoriously cast North Carolina as one of the most discriminatory states in the nation for LGBTQ people, and especially transgender people. 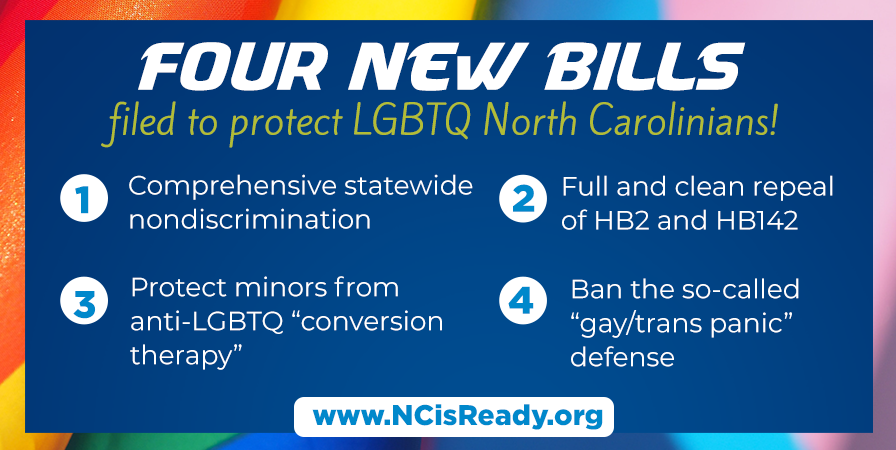 Four bills were filed today in the NCGA:

Click here to view a recording from a March 30 press conference about the introduction featuring lawmakers, advocates, and voices from the business and faith communities.

“In the wake of ongoing targeted attacks against transgender youth in North Carolina and across this country, these four bills introduced today are a breath of fresh air. For too long, LGBTQ North Carolinians have lived under the shadow of archaic and outdated laws that impact everyone in our community, but most directly those of us that live at the intersections of multiple lenses of oppression. Black, Brown, transgender, and gender-nonconforming North Carolinians continue to suffer the greatest threats to life and safety under the legacy of House Bill 2, the lack of nondiscrimination protections in this state, through the invocation of the so-called ‘panic defense’ and at the hands of those practicing conversion therapy. We must pass these four bills so North Carolina can not only catch up with the rest of America but also begin to build a state that actively embraces the true diversity of the human experience.”

“It’s been five years since North Carolina passed the extreme and reckless HB2, vilifying transgender people like myself and singling us out for discrimination, harassment, and trauma. Since then, we’ve seen thousands of residents open their eyes to the mistreatment that LGBTQ people endure and open their hearts and minds to solutions that will make life in North Carolina more equitable. This package of bills confronts the attempted erasure of LGBTQ minors, ensures everyone can live in public as their authentic self, and catches our laws up to where we really are as a state. It’s time to turn the page on the relics of our past such as HB2 and HB142 and move toward a path that is  inclusive with an equitable future for our state.”

“This legislation will move North Carolina forward and help us build a state where LGBTQ people are respected and protected, no matter where they live. Too many LGBTQ people – especially those who are BIPOC or transgender – experience discrimination and violence in North Carolina, and our laws right now leave them vulnerable. We need to pass strong legislation that gives people the best opportunity to thrive.”

North Carolina is home to 63,000 LGBTQ people, according to 2020 data from the Williams Institute at the UCLA School of Law. Polling shows strong public support for LGBTQ-inclusive bills like these in North Carolina. A full 67% of people in North Carolina support protecting LGBTQ people from discrimination. And an April 2019 poll shows that a bipartisan supermajority of North Carolinians (80%) support efforts to protect minors from conversion therapy. An April 2019 poll tracked overall support for this life-saving legislation at 80%, including 87% of Republicans.

The push for statewide action comes as communities across North Carolina work to enact LGBTQ-inclusive nondiscrimination ordinances. Since December 2020, when an anti-LGBTQ moratorium on local protections expired, 6 municipalities have passed strong ordinances, and others plan to take action later this year. Through the NC is Ready for LGBTQ Protections campaign, led by Equality North Carolina and the Campaign for Southern Equality, a diverse array of voices has spoken out for LGBTQ protections at the local, state, and federal levels. Learn more at www.ncisready.org.