Today the Campaign for Southern Equality (CSE) and Western North Carolina Community Health Services (WNCCHS) released The Report of the 2019 Southern LGBTQ Health Survey, which provides a groundbreaking look at the health and health care experiences of lesbian, gay, bisexual, transgender, and queer (LGBTQ) people in the Southern United States. 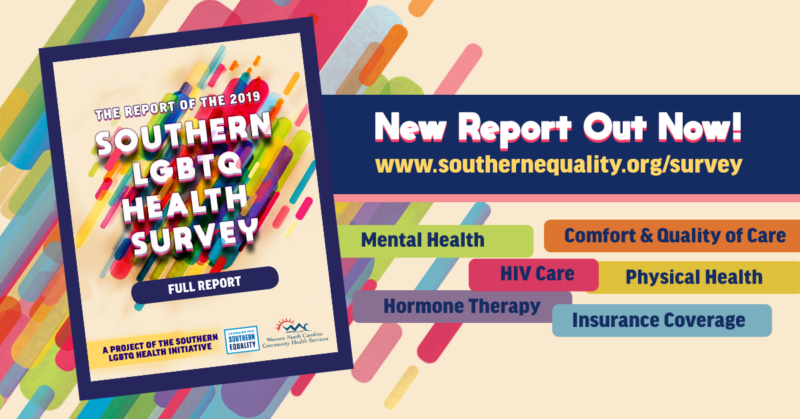 With 5,617 participants, the 2019 Southern LGBTQ Health Survey is one of the largest samples ever of LGBTQ Southerners talking specifically about their health, their bodies, and their lives.

The South is home to more than one third of LGBTQ Americans, but there has been limited research to date on LGBTQ Southerners’ specific experiences with health issues. Key findings of the Southern LGBTQ Health Survey – which you can read in the full report and in the Executive Summary (available in English and Spanish) – include:

“The survey’s findings are both hopeful and heartbreaking and, above all, a call to action. Access to health care is a basic right, but you need to understand a community’s health care needs before you can meet them. This survey provides a new breadth and depth of insight into LGBTQ Southerners’ health experiences, illuminating the acuity of need in people’s lives, the tremendous resilience of LGBTQ Southerners, and the many reasons to feel hopeful about what’s happening on the ground in the South. Now, armed with this new data, we must work harder than ever to accelerate change and build a South where LGBTQ people can finally access the health care they need in their hometowns.”

“For 24 years, WNCCHS has been on the frontlines of providing care to transgender patients and people living with HIV, and the Southern LGBTQ Health Survey brings to life the stories we hear from patients every day. The Survey findings help move the conversation around health equity from the individual level to the regional and systems level and point toward the changes that we need to ensure that all LGBTQ people can get the care they need and deserve.”

The authors of the 2019 Southern LGBTQ Health Survey Report – as well as a range of Southern health care providers, LGBTQ Southerners willing to speak about their health care experiences, and Survey Ambassadors who helped distribute the report – are available to speak with reporters.

Led by a team of LGBTQ Southerners, the Southern LGBTQ Health Survey was rooted in community-based research methods, including working with a team of Survey Ambassadors who spanned the region and who included a minister, a nightclub promoter, and grassroots leaders. The project is part of the Southern LGBTQ Health Initiative, a collaboration of CSE and WNCCHS to improve access to LGBTQ-friendly primary care, HIV care and support services across the South. In addition to community-based research, this initiative involves training primary care provides in affirming health care practices and providing direct funding to grassroots groups leading innovations in access to LGBTQ health care.

Access the full report and executive summary in English and Spanish at www.southernequality.org/Survey.