Next week, local elected leaders in Hillsborough, Carrboro, and Chapel Hill will discuss ordinances that would extend nondiscrimination protections to LGBTQ people in key areas, including employment, housing, and public spaces. The ordinances make these communities the first municipalities to discuss LGBTQ-inclusive nondiscrimination protections in recent years. Since 2016, municipalities have been blocked from adopting LGBTQ protections by HB142, but a key prong of the law expired on December 1, 2020. 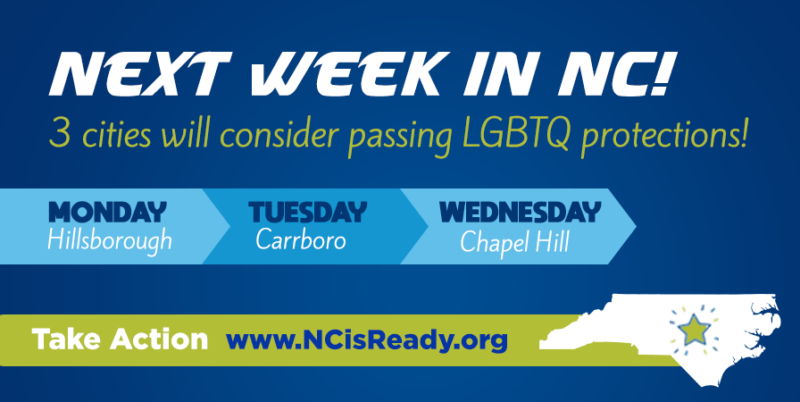 Here are details for each of the City Council or Board of Commissioners meetings:

Equality North Carolina and the Campaign for Southern Equality, NC-based organizations that work toward LGBTQ equality, have been urging local elected officials to pass LGBTQ-inclusive nondiscrimination ordinances through a new joint effort, NC is Ready for LGBTQ Protections (www.ncisready.org). The organizations are working with LGBTQ community members across the state to advocate for local action. According to polling, more than 67% of North Carolinians support non-discrimination measures.

“North Carolinians have been ready for LGBTQ nondiscrimination protections for a long time. With no level of comprehensive safeguards for LGBTQ North Carolinians as we move through the world, our most vulnerable community members, particularly Black, Brown, trans and gender-nonconforming folks, face a disproportionate risk of harassment and violence on a daily basis. Equality NC is thrilled that elected officials are taking up the issue of nondiscrimination and encourage other elected leaders – including federal lawmakers, who have a clearer path to passage than ever before following this week’s Senate wins in Georgia – to recognize this as a life or death issue for our communities.”

“We’re grateful that these North Carolina communities are taking the lead on LGBTQ nondiscrimination protections and showing how it’s possible to create a state where everyone can thrive. After such a divisive start to the year – with violent unrest at the U.S. Capitol and persistent attacks on our democratic institutions from our outgoing president – it’s inspiring to see our elected leaders coming together to consider policies that tangibly improve residents’ lives. This will make an immediate difference in the lives of LGBTQ people, from youth to elders, who call these communities home.”