As we continue to condemn the extremism on display at the Capitol today, we also celebrate the election of Senators-Elect Rev. Raphael Warnock and Jon Ossoff, whose Georgia races were called by multiple outlets. Their victories mean that the U.S. Senate will have a 50-50 split between the Democratic and Republican parties, with Vice President-Elect Kamala Harris’s vote serving as a tie-breaker. 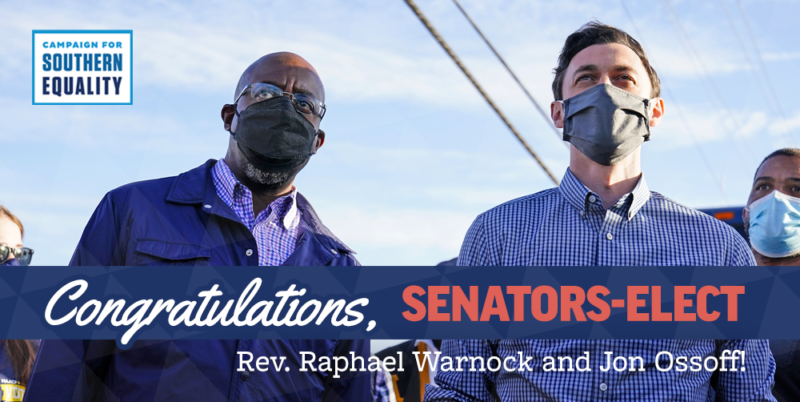 The Campaign for Southern Equality (CSE) calls for swift and urgent federal action from the 117th U.S. Congress on a number of crucial issues. These include:

“For the one-third of LGBTQ Americans who live in the South, inaction from the federal government has caused significant harm, delaying solutions on everything from COVID-19 dangers, economic hardship, and healthcare disparities to anti-LGBTQ discrimination and the violence of white supremacy. The gridlock has been particularly consequential in the South, where many state legislatures have remained hostile to progress on these issues, despite popular support for reform from their constituents.”

“Finally, following these important Senate victories, there is a pathway forward for addressing these societal challenges. Now, every person committed to equity and dignity for their neighbors must come together to push Congressmembers to do their job and pass legislation that works toward a country where everyone can thrive. We encourage all members of the Senate – whatever their party – to follow the lead of the American people and support LGBTQ equality.”

“We also applaud Rev. Raphael Warnock and Jon Ossoff, both supporters of LGBTQ equality, on their historic campaigns. Their work builds on and benefits from the efforts of Stacey Abrams, Fair Fight, and thousands of Georgians – including many BIPOC organizers – and their victories are a hopeful signal of what is possible in the South.”