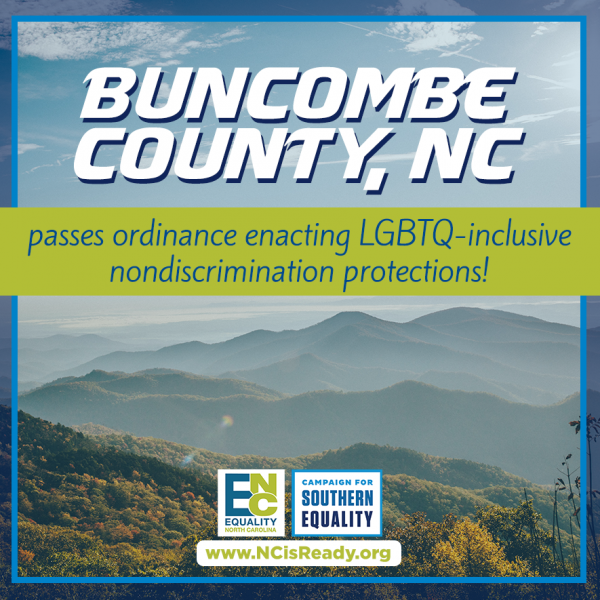 Tonight, the Buncombe County Commission voted 6-0 to pass an ordinance that protects residents from discrimination based on race, natural hair or hairstyles, ethnicity, creed, color, sex, sexual orientation, gender identity or expression, national origin or ancestry, marital or familial status, pregnancy, veteran status, religious belief or non-belief, age, or disability. The ordinance ensures protections in employment and places of public accommodations – such as restaurants and businesses. Studies have shown that 1 in 3 LGBTQ people – including 3 in 5 transgender people – have experienced discrimination in the past year.

It is the first LGBTQ-inclusive nondiscrimination to pass in Western North Carolina. At this evening’s County Commission meeting, 31 residents spoke during an hour of public comment, with 20 in strong support of the ordinance, consistent with polling data showing that 67% of people in North Carolina support protecting LGBTQ people from discrimination. This year the Asheville Area Chamber of Commerce found that the overwhelming majority of business leaders in the area (around 80%) said they did not think the ordinance would have an impact on their day-to-day operations.

So far, six other similar LGBTQ-inclusive nondiscrimination ordinances have passed in North Carolina this year, including in Carrboro, Chapel Hill, Durham, Greensboro, and Hillsborough, as well as Orange County.

Allison Scott, Director of Impact & Innovation at the Campaign for Southern Equality, delivered public comment in support of the ordinance. She said tonight after passage of the protections:

“As a lifelong Buncombe County resident, I could not be more proud of my local government for doing the right thing today by ensuring that all people – including LGBTQ people – are protected from discrimination. This ordinance is a big step toward elevating the values we share in Western NC: Taking pride in our work, caring for our neighbors, giving back to our communities, and treating everyone the way that we want to be treated – with dignity, compassion, and respect. LGBTQ folks in our county, especially the many transgender young people who have been hurting this year, will feel safer, more welcome, and more included because of the Commission’s vote today.”

“At a time when transgender and gender-nonconforming youth are under attack in our state and across this country, it’s heartening to see Buncombe County take such a public stand on the rights and protections of LGBTQ North Carolinians. With this western county affirming the right to nondiscrimination for our most vulnerable community members, Buncombe has demonstrated that this truly is a statewide movement for our communities. We hope that elected officials across our state see the targets on our backs and hear these calls to action – we need these protections in every city, town, and county across North Carolina.”