Today the House of Delegates in Virginia voted to pass the Virginia Values Act (HB1663 and SB868), which would establish comprehensive nondiscrimination protections for LGBTQ people across the state. The legislation also passed a third and final reading in the Senate today. Now, advocates are urging lawmakers to reconcile the Senate and House versions of the bill for final passage and send the legislation to the desk of Governor Ralph Northam. Virginia is now poised to join 20 other states and the District of Columbia with comprehensive LGBTQ nondiscrimination protections. 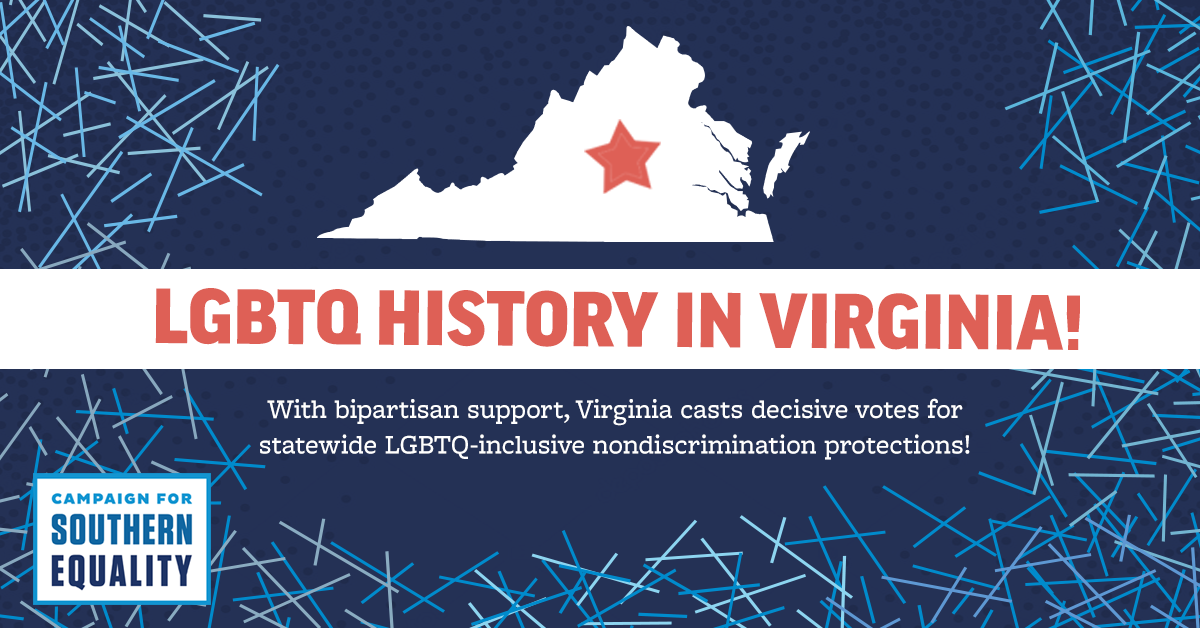 We applaud the efforts of the Virginia Values coalition, and particularly our partners at Equality Virginia, for their tireless advocacy for LGBTQ Virginians. The Campaign for Southern Equality is proud to serve as a community partner of the coalition.

“Today’s vote in Virginia is a breakthrough for LGBTQ Southerners, the first time a legislative body in our region has taken decisive statewide action to protect LGBTQ people from discrimination. The Virginia Values Act sends a powerful message that no one should face discrimination because of who they are or who they love, and it charts a hopeful pathway forward for all LGBTQ Southerners.”

“For years we’ve been seeing public support for the inherent dignity of LGBTQ people grow among Southerners. In 2020, we’re seeing that support for LGTBQ equality show up as a political force across the South: Today’s vote in Virginia builds on the regional momentum of legislation protecting minors from ‘conversion therapy’ advancing in Kentucky and Republican elected leaders in West Virginia and Georgia publicly opposing anti-LGBTQ discrimination.”

“We will keep pushing for – and celebrating – progress at the local and state levels. But the reality remains that we need federal action as quickly as possible to ensure that protections reach every corner of the South. We continue to call on the United States Senate to pass the Equality Act, which has already passed the House and would provide LGBTQ-inclusive nondiscrimination protections at the federal level.”

The Virginia Values Act sends a powerful message that no one should face discrimination because of who they are or who they love, and it charts a hopeful pathway forward for all LGBTQ Southerners.” – Rev. Jasmine Beach-Ferrara

Virginia is home to an estimated 185,000 LGBTQ adults, with 18% of same-sex couples in the state raising children, according to The Williams Institute. Polls have found that 78% of people in Virginia believe think that LGBTQ people experience discrimination in the state. And a supermajority of 68% of Virginians say they support protecting LGBTQ people from discrimination, according to Public Religion Research Institute.

This month lawmakers in Virginia have also advanced legislation to protect minors from the discredited anti-LGBTQ practice of “conversion therapy” and a bill to ensure that transgender people are fully protected from discrimination in healthcare settings.