Today more than 200 medical professionals from across the South released a statement expressing strong opposition to a new legislation that has been filed in states across the country, including a cluster of Southern states, prohibiting doctors from providing medically necessary care to transgender children under the age of 18. Signatories of the statement, an effort coordinated by the Campaign for Southern Equality, include physicians, nurses, physician assistants, psychiatrists, and mental health professionals. Nearly all of the signers work directly with transgender adolescents or adults. 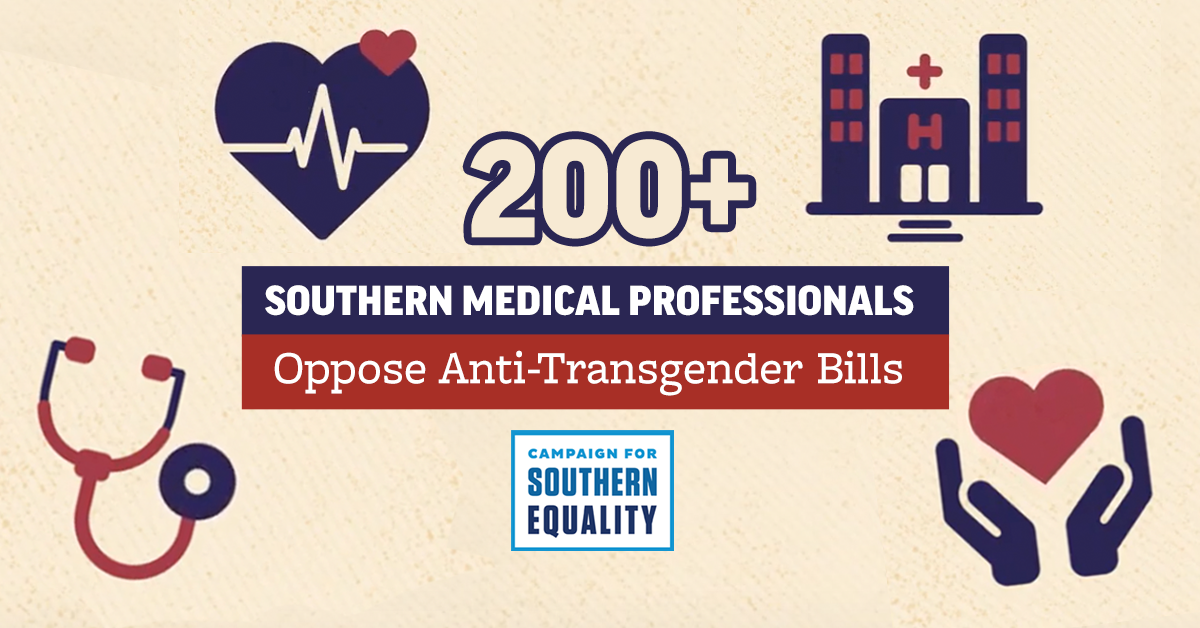 These bills have been introduced in South Carolina, Kentucky, South Dakota, Colorado, Oklahoma, and Missouri. On Monday, advocates in Florida rallied against similar legislation and declared the bill dormant after lawmakers said they would not meet again to consider the bill.

The statement from health care professionals – available in full here – reads, in part:

“As medical professionals serving Southerners, we have an obligation to advocate for the health of all of our patients and oppose discrimination. That’s why we strongly oppose legislation that targets transgender young people for discrimination. These bills run counter to the growing consensus in the medical community that improving access to gender-affirming care is a central means of improving health outcomes for transgender people. Major medical associations, including the American Medical Association, the American Academy of Pediatrics, and the American Academy of Family Medicine, recognize that supporting transgender youth is critical to their health and well-being.”

“Many credible studies of trans youth populations have demonstrated that gender-affirming care is linked to significantly reduced rates of depression, anxiety, substance abuse, and suicide attempts. Gender-affirming care reduces reliance on self-prescribed and self-administered hormone use, which can be dangerous without the oversight of a physician. To put it plainly, gender-affirming care saves lives and allows trans young people to thrive.”

“As a physician I took an oath to do no harm – but withholding medically necessary care from my transgender patients would absolutely cause long-term harm. Enacting this disturbing anti-transgender legislation would prohibit me and other medical providers from doing our jobs, forcing us to violate existing standards of medical care for transgender patients. I join so many of my colleagues across the South in urging lawmakers to reject these dangerous and discriminatory bills.”

“We’re determined to resist these coordinated attacks against transgender youth carried out in so many states this year, the latest installment in a decades long effort by anti-LGBTQ organizations to stigmatize the LGBTQ community. We forcefully reject the politics of fear and prejudice that are at the root of these anti-transgender bills. We stand in support of transgender youth and we’re grateful for all of the Southern medical professionals who are using their voices to strongly support the inherent dignity of all of their patients. We’ll never stop working toward a South where we all have every opportunity to thrive – including the basic right to receive the healthcare everyone needs to live their most authentic, fulfilling lives.”

“I have seen first hand the life-saving impact that affirming medical care has for transgender youth, and the real harms when such care is denied. As a transgender person in South Carolina, I’m inspired by the stories of youth, families, and medical providers speaking out about the proposed law here, and in other states – there is a rising tide of public support for transgender people that we will harness into the political will to defeat these inhumane bills.”