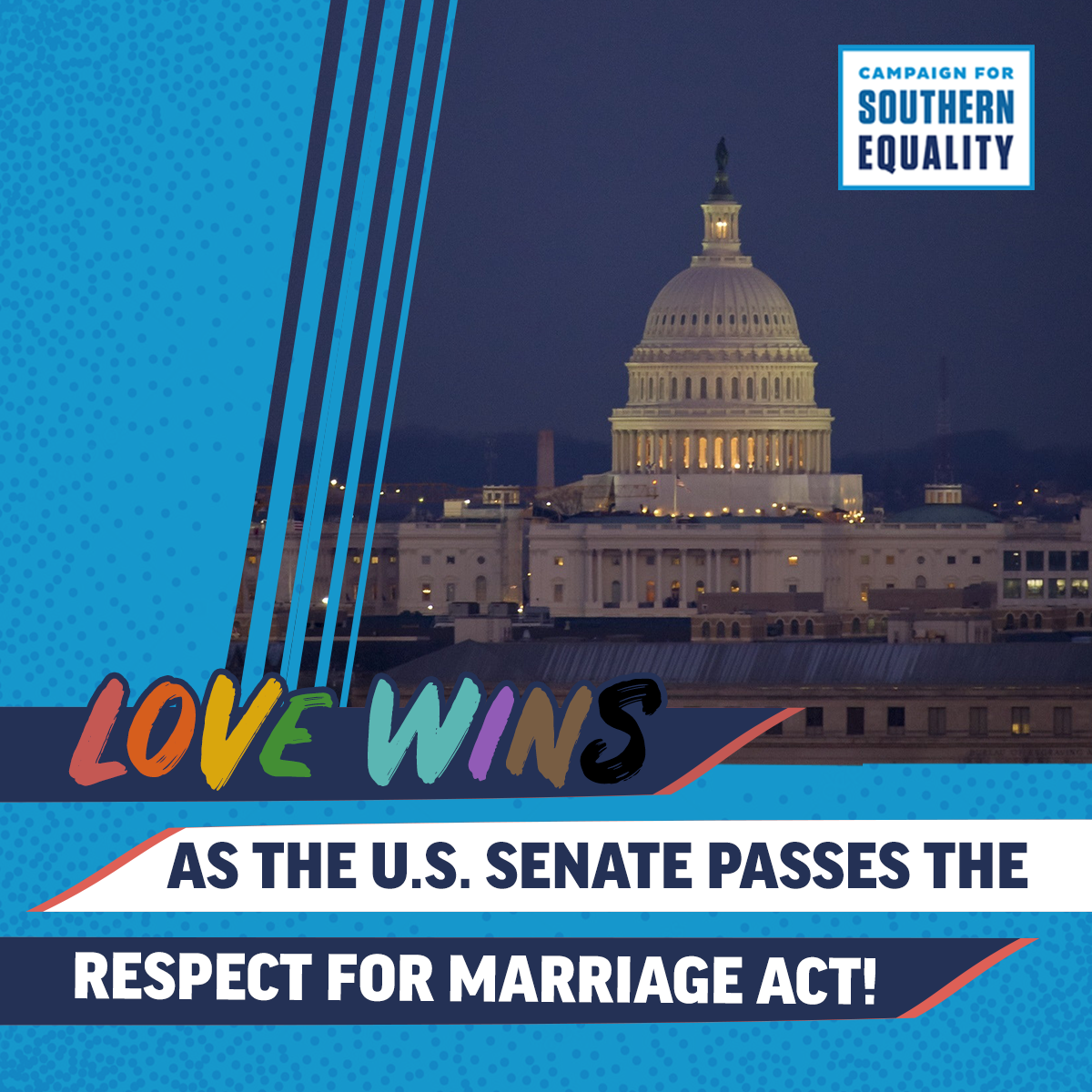 Today the United States Senate passed the Respect for Marriage Act, a major step toward protecting the freedom to marry from the threat of far-right political forces seeking to overturn U.S. Supreme Court precedent on the freedom to marry for same-sex couples and interracial couples. The bill passed with 61 votes, including from every Democratic Senator and 12 Republican Senators, signaling the strong bipartisan support for the freedom to marry nationwide.

Polling shows that 71% of Americans support the freedom to marry for same-sex couples, including majority support from Republicans and majority support in every state in the South. Support has steadily climbed every year since the 2015 Supreme Court ruling.

“For LGBTQ Southerners, the Respect for Marriage Act is a must-pass bill. One-third of LGBTQ Americans live in the South and, without federal protections, are vulnerable to state-level political attacks seeking to roll back the freedom to marry. The South makes the case for why we urgently need this federal law – all of our families deserve respect and dignity, regardless of the state we live in.”

“Support for the Respect for Marriage Act from Senators and Representatives across the political spectrum and throughout the South mirrors what we’re seeing on the ground: Ever-growing public support for LGBTQ equality. Also true is the fact that our work continues, and we will push harder than ever to secure full protections for LGBTQ people under the law and to defeat the relentless attacks on transgender youth playing out across the country.”

This year the Campaign for Southern Equality has repeatedly called for passage of the Respect for Marriage Act since the launch of our Meeting the Moment campaign this summer, following a brutal legislative session full of anti-LGBTQ attacks and the overturning of Roe v. Wade by the U.S. Supreme Court. Thousands of LGBTQ and allied Southerners have contacted their U.S. Senators, and we have shared the stories of Southern LGBTQ families online and in the press.

This month CSE published an open letter calling for passage of the Respect for Marriage Act, signed by many of the LGBTQ people who helped lead a Southern campaign calling for the freedom to marry a decade ago. The couples participated in CSE’s “We Do” campaign, in which couples requested marriage licenses in Southern states, provoking denials and shining a light on the urgent need for federal action on the freedom to marry. The effort, from 2011-2015, was the largest sustained campaign around marriage equality in the South, taking place at a time when many predicted it would be decades before the freedom to marry would be achieved in the region. Read the letter here.

“The passage of the Respect for Marriage Act is a victory for LGBTQ Americans, for parents of LGBTQ children like myself, and for the bipartisan supermajority of Americans who support the freedom to marry. As a conservative, I’ve always believed in limited government – and that people should be able to make their own personal decisions about their families and their faith. To see 11 Republican Senators vote in favor of this commonsense bill restored some of my faith in the party, and to see both Senators from North Carolina vote yes makes me even prouder to call North Carolina home. All people – including LGBTQ people like my daughter – deserve to see their committed relationships granted dignity by their country, and that’s what the Respect for Marriage Act does.”

Data from The Williams Institute show that at least 200,000 same-sex couples live in a Southern state.

Across the South, far right elected officials have taken aim at the Obergefell ruling for years. Key examples: