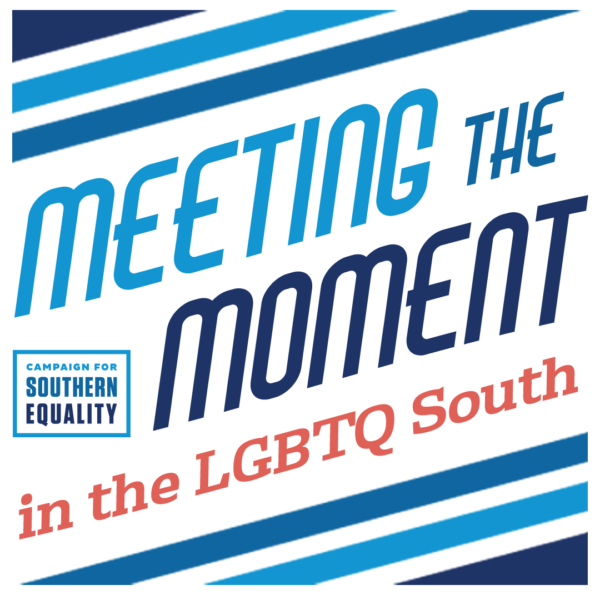 Today the Campaign for Southern Equality released a new three-pronged strategy for supporting LGBTQ Southerners in a post-Dobbs political and legal environment. The refreshed framework elevates a sobering paradox: That even as we see unprecedented levels of support for LGBTQ equality from individuals and institutions in the South, we are also bracing for the region to become an epicenter of attacks on LGBTQ rights at the legislative and administrative levels.

The new strategy, Meeting the Moment in the LGBTQ South, will harness the Campaign for Southern Equality’s resources and power – including staff, funding, infrastructure, supporters, and communications program – to respond to new attacks of LGBTQ rights, continue to advance LGBTQ rights, help people protect their rights and access care, and ensure that LGBTQ Southerners feel connected, loved, and supported.

There are three prongs to Meeting the Moment in the LGBTQ South:

“In the first half of 2022, the Supreme Court overturned Roe v. Wade and all but invited challenges to LGBTQ rights, more than two dozen anti-LGBTQ bills became law, and the far right continued to weaponize faith to attack our community. There’s no question that we are entering a new chapter in the movement for LGBTQ equality – one where the far-right political movement feels more emboldened than ever to roll back fundamental American rights and freedoms. All of this is happening despite growing public support for LGBTQ equality, especially here in the South, where communities continue to pass nondiscrimination ordinances and polls track higher and higher support. We must work harder than ever to mobilize these supporters to put pressure on their elected officials to stop attacking LGBTQ people and start building a country where everyone can thrive.”

Stay updated about all of the Meeting the Moment programming at www.southernequality.org/meetingthemoment.