NOTE: This blog post is a collaboration between Campaign for Southern Equality’s Abby Shuler and Craig White.

LGBTQ+ students are returning to school this fall with clearer and stronger anti-discrimination protections than ever before. 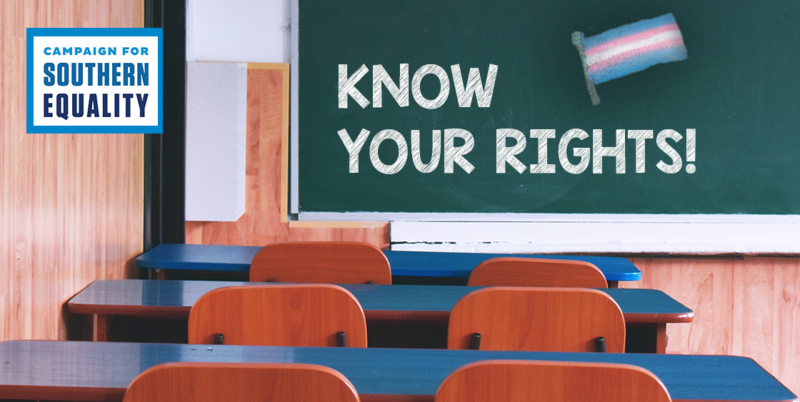 Back-to-school news stories about the return of in-person learning and debates over mask mandates have left another piece of important news to go largely unmarked: For the first time, the US Department of Education is directly and clearly communicating that LGBTQ+ students are protected from discrimination under federal law.

In June 2021, the US Department of Education followed up with a statement of interpretation of this decision, confirming its relation to Title IX protections in educational settings. Although parents and advocates have argued for years that Title IX, which prohibits discrimination on the basis of sex, also protects LGBTQ+ students, this is the first time that the Department has formally confirmed those legal protections.

The Office of Civil Rights at the Department of Education, in partnership with the Department of Justice, has also developed a number of resources for families and schools on how to support LGBTQ+ students, including:

The Supportive Schools team at the Campaign for Southern Equality is excited about the work of the Office of Civil Rights, and we also know that a lot of work remains to be done. Openly discriminatory laws and policies remain on the books in both states and school districts across the South. Student information systems and records are set up in ways that are still more likely to violate than protect the privacy of a student who has a name or gender marker different from what they were assigned at birth. School cultures that have tolerated bullying and harassment of LGBTQ+ students will not change overnight. And some Southern legislatures are already gearing up to propose new anti-trans legislation next year.

As always, we will stand with LGBTQ+ youth as they face these challenges – and this time, the Department of Education is standing with them too.

What you can do: