With the upcoming election cycle just a few months away, it’s more important than ever to speak out and take action against injustice. In the fight against inequality, voting offers the ability for people to leverage their voices to elect leaders that have both their community and the country’s best interest at heart. 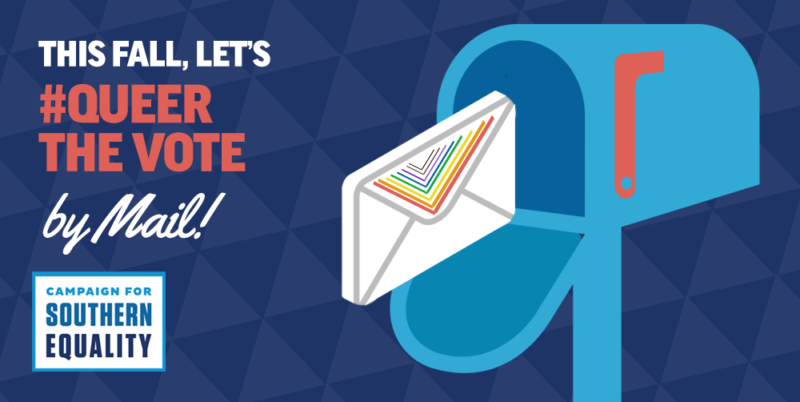 As Americans continue to draw awareness to systemic issues disproportionately facing minority and marginalized communities, the impact of voting should not be taken lightly. Since the 2016 election in which Donald Trump became the 45th President of the United States, marginalized communities have seen a spike in acts of violence, incivility and political attacks against their livelihood. The Trump Administration itself has rolled back protections for or introduced shameful measures further marginalizing immigrants, LGBTQ people and especially transgender people, people of color, people of minority faiths, and more.

In this upcoming voting cycle, it’s important for all Americans to use our voices to advocate for a more equal and just society where all residents can thrive. With many Southern states – including North Carolina, South Carolina, and others – committing to vote by mail proceedings, this voting season offers a new and profound opportunity. As election season nears, we must understand the wide-ranging impact that local and national elections have on democracy.

While the presidential election plays a vital role in shaping many policies surrounding the country, it is, of course, not the only race  with implications for the rights of LGBTQ folks and others. When we look for change to be implemented across the board, it starts with a focus on local and community politics. The presidential election is important, but problems and issues concerning most people are resolved by local officials. In addition, local officials have a widespread impact that can affect national politics and ultimately have the potential to lead the fight against injustice and advocate for systemic change.

With the number of coronavirus cases continuing to rise, many Southern states are taking to mail-in voting to allow for a safer and regulated voting process. While voting by mail may be unfamiliar to some, this technique offers some advantages than the more traditional voting in-person process. For starters, voting by mail plays in favor of voter’s convenience and satisfaction, so this means that voters can cast their ballots in the comfort of their own home and continue abiding by CDC social distancing guidelines.

For additional information on how to vote by mail in North Carolina, click the links below.

For additional information on how to vote by mail in South Carolina, check out these resources:

For additional information about other state’s vote by mail process, click the links below.

The option to vote by mail can lead to an expansion of the franchise and  higher turnout rate – so long as folks have the education they need around mail-in voting. Instead of waiting in long voting lines, voters can complete their ballot at their own pace and avoid in-person polling places, which is especially vital this year, as folks seek to reduce the risk of contracting COVID-19. Vote by mail also allows for voters to take all the time they need to study the laws and policies on the ballot without having to feel pressured into a decision they are not knowledgeable about or comfortable with.

In this upcoming election, every vote counts. Collectively, voters have the ability to impact the system in a way that advocates for equality and champions for systemic change. As this November rolls around, remember that your vote matters. Whether you vote by mail or prefer to vote in person, you have the power to challenge the system and work to build an America that champions equal rights for all.