Today the Alabama Senate approved Senate Bill 10, a bill that would make it a Class C felony for medical professionals to provide transition-related care to transgender patients under the age of 19. A Class C felony could result in a 10-year prison sentence or a $15,000 fine in Alabama. 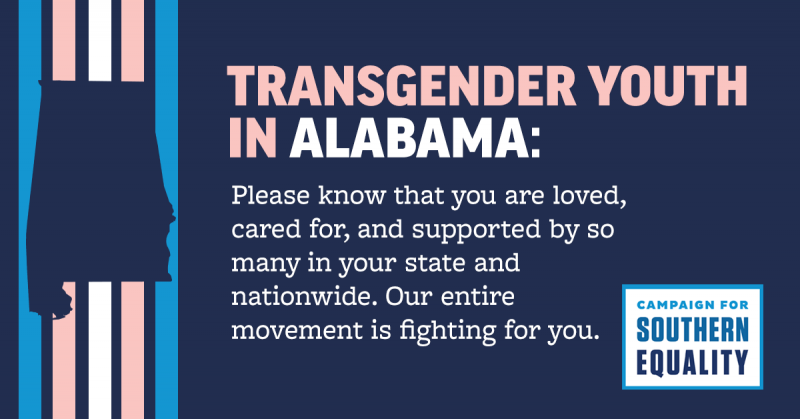 The bill also requires teachers and staff at schools in Alabama to share with students’ parents if they learn that “a minor’s perception that his or her gender is inconsistent with his or her sex.” In effect, the bill essentially requires teachers to “out” transgender students to their parents, potentially before they are ready to share.

If the Alabama House of Representatives approves its companion bill, HB1 and the proposal is signed by Governor Kay Ivey, Alabama will be the first state in the country to pass a bill like this.

A separate bill today, HB391, is being considered by the Alabama House that would restrict transgender students from participating in school athletics.

Allison Scott, Director of Impact and Innovation for the Campaign for Southern Equality, said today:

“This bill in Alabama – and other legislation like it across the country – isn’t just cruelly targeting transgender youth and their doctors, it also lacks a fundamental understanding of transgender young people. Lawmakers are insisting that they know what’s best for transgender young people and ignoring the recommendations of medical experts, including the American Academy of Pediatrics, the American Medical Association, and more. Patients along with their health care providers, not politicians, should decide what medical care is in the best interest of a patient – and a preponderance of research shows that affirming and supporting trans youth is essential to their well-being.”

“As a transgender woman, I felt sick to my stomach reading about this bill. Not only does it jeopardize the mental and physical health of children by banning affirming care – but it also requires school staff to out trans youth to their parents. It’s effectively endangering  many possible lifelines for a transgender child: Under this bill they can’t go to their doctor for help, and they can’t seek counsel or comfort from their teachers or school staff. If their parents reject them for their gender identity, where are they supposed to go? I implore lawmakers to recognize this bill as the dangerous weapon that it is and reject it outright – including Gov. Kay Ivey, who should veto if it reaches her desk. I also send love, support, and validation to the trans youth in Alabama and nationwide who have already been harmed by this attack.”