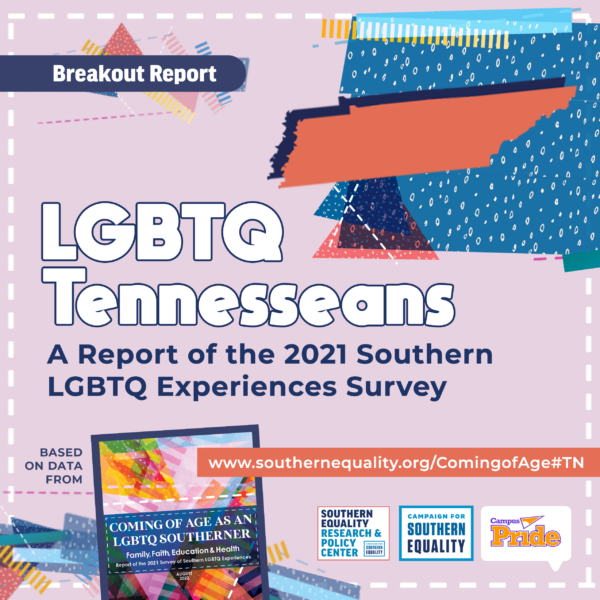 Today the Campaign for Southern Equality (CSE) and Campus Pride released a new report focused on the life, school, and health experiences of LGBTQ people in Tennessee. The report’s release comes just a few days into the 2023 legislative session in the Tennessee legislature, where a series of anti-LGBTQ bills have been filed.

This breakout is a supplement to Coming of Age as an LGBTQ Southerner: Family, Faith, Education & Health, and relies on data from the 2021 Survey of Southern LGBTQ Experiences, a survey of 4,186 LGBTQ people who live in the South – including 381 from Tennessee. The survey oversamples people in the 18-24 age range. The report was co-authored by Dr. Austin H. Johnson and Emma Chinn.

Key findings of the supplement – which you can read here – include discussion of:

“In recent years Tennessee has been one of the most notorious states when it comes to passing anti-LGBTQ+ legislation – and this year extreme forces are already zeroing in on the Volunteer State to push a wave of discriminatory proposals. The stories in this new breakout report capture the feelings and experiences of LGBTQ people in Tennessee, including the specific and alarming impacts of legislative attacks. This report should be a wake-up call to Tennessee lawmakers to stop attacking LGBTQ residents and start working to address the disparities they face each day.”

Emma Chinn (she/her pronouns), co-author of the report and a Master of Public Policy Candidate at the Humphrey School of Public Affairs, said:

“As a proud Tennessean, LGBTQ community member, and student of public policy, I understand that my life experiences – from what I didn’t learn about LGBTQ identity at my public high school, to the anxiety I feel when thinking about starting a family in Tennessee with my genderqueer partner – are deeply tied to the decisions of our elected officials. However, for a long time, there has been limited research connecting LGBTQ Tennesseans’ experiences with state policy. This report takes a first step toward changing that.”

Advocates looking to get engaged in the legislative session in Tennessee should follow the Tennessee Equality Project, whose Executive Director Chris Sanders contributed an opening letter to this report.

Access this state spotlight supplement of Coming of Age as an LGBTQ Southerner – as well as the full report – at www.southernequality.org/ComingofAgeSurvey#TN.