For the fifth consecutive year, the Campaign for Southern Equality (CSE) has reopened applications for its Southern Equality Fund, which provides a pipeline of resources, including direct funding and training, to Southern grassroots advocates who are organizing for LGBTQ equality in their hometowns. Through the Southern Equality Fund, CSE distributes 10% of its budget annually through grassroots grants – projected to total more than $80,000 in 2020 – to support LGBTQ grassroots organizers and direct service providers who work with LGBTQ Southerners. 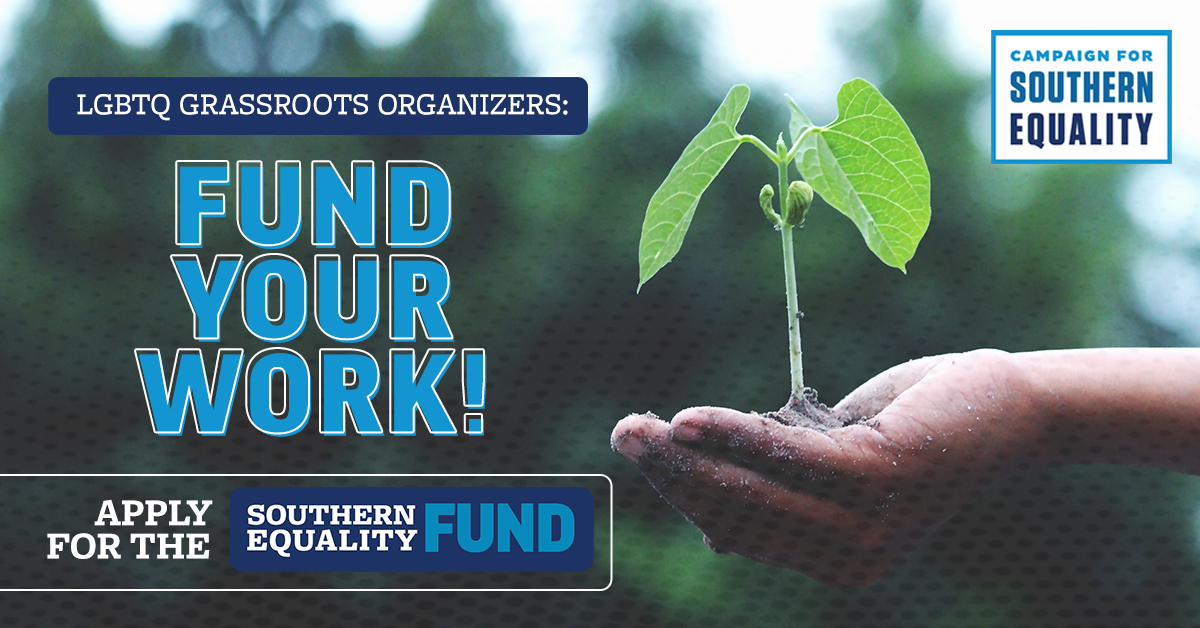 Over the past five years CSE has awarded more than $250,000 to nearly 300 grassroots Southern groups and organizers across 12 states through Southern Equality Fund grants. Funded projects have included the first LGBTQ Pride event in a small town in Northern Alabama, advocacy work focused on trans Latinx women in rural North Carolina, and rapid response organizing efforts related to immigration rights.

“We believe that organizers on the front lines of the South can transform our region, but they need the funding and support to do so. So while it may seem unusual for a nonprofit like the Campaign for Southern Equality to give out money, it’s central to our analysis around how to equitably and ethically move funding and resources to where they are most needed. The Southern Equality Fund is about creating new circuitry in how money moves around the South. We provide grants for everything from trans-friendly medical services, to food banks, to youth support groups. It’s about responding to basic and urgent needs in our community, but it’s also about investing directly in the next generation of grassroots organizers who are leading these initiatives.”

The South is home to one-third of all LGBTQ Americans, a community that is racially and economically diverse and dispersed across both metro and rural areas in the region. LGBTQ Southerners experience noted disparities in health, particularly related to mental health issues and HIV/AIDS, documented most recently in the 2019 Southern LGBTQ Health Survey. And, despite rising levels of public support for full LGBTQ inclusion in almost every Southern state, anti-LGBTQ legislation proliferates in the region.

The Southern Equality Fund was, in part, born out of a need to address a critical funding gap for LGBTQ Southerners. As recently as 2014, less than 5% of all funding in the LGBTQ movement benefited people living in the region; since then, that percentage has increased significantly to around 25%. This growth is largely due to initiatives like the Out in the South Fund, by Funders for LGBTQ Issues, and increased funding for HIV/AIDS issues in the Deep South. Much of this new infusion of funding has been directed to large metro areas and larger non-profit organizations. The Campaign for Southern Equality, through our Southern Equality Fund, is part of an emerging network of organizations and community funds that focus on filling this gap by funding grassroots leaders, especially those in small towns and rural areas.

Southern grassroots organizers working to promote equality, safety, and/or visibility of LGBTQ people can learn more about the Southern Equality Fund and complete a simple online application for a grant by clicking here.