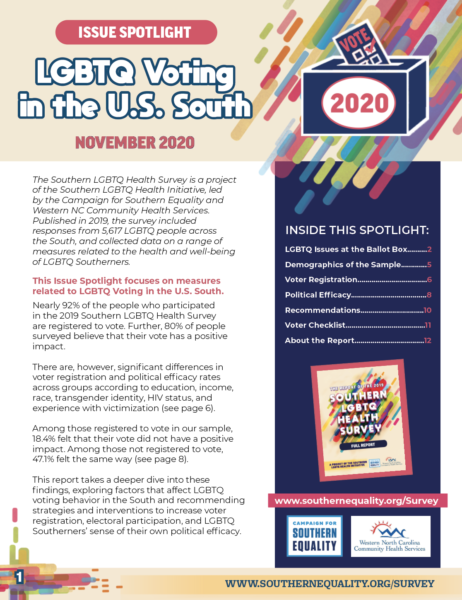 The report highlights why political participation from LGBTQ Southerners is essential in increasing representation at all levels of government and building the political voice and will to achieve full legal equality. It is a supplement to The Report of the 2019 Southern LGBTQ Health Survey and relies on data from that survey, taken by more than 5,600 people across the South, the largest sample ever of LGBTQ Southerners talking specifically about their health and healthcare.

Key findings of the supplement – which you can read here – include:

“The South is home to roughly 3.6 million LGBTQ adults, more than in any other region. And along with our friends, family members, and neighbors, we have the power to elect our leaders who will advance our community’s policy priorities, which includes pushing for LGBTQ-inclusive policies and standing against discriminatory laws. This new analysis highlights an engaged constituency of LGBTQ Southerners and speaks to ways that LGBTQ voters in the South can build our political power, leverage our voices for change, and make an impact on our communities.”

The Southern LGBTQ Health Survey is part of the Southern LGBTQ Health Initiative, a collaboration of CSE and WNCCHS to improve access to LGBTQ-friendly primary care, HIV care and support services across the South. In addition to community-based research, this initiative involves training primary care providers in affirming health care practices and providing direct funding to grassroots groups leading innovations in access to LGBTQ health care.

Access this issue spotlight supplement of the Southern LGBTQ Health Survey – as well as the full report and executive summary in English and Spanish – at www.southernequality.org/Survey#Voting.