Great news today out of Virginia, where a federal judge has ruled in favor of Gavin Grimm, a young transgender man who has made headlines since 2015, when he filed a lawsuit against Gloucester County School Board for anti-transgender discrimination. Congratulations to the ACLU, ACLU of Virginia, and Gavin on this important victory. 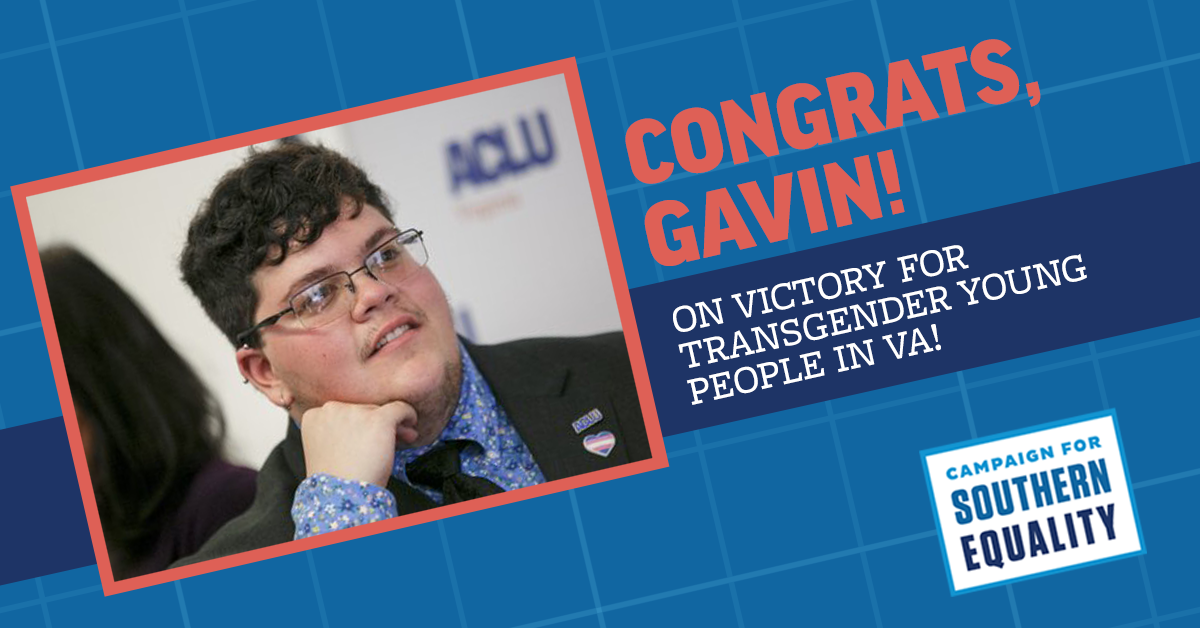 For years, even after his graduation, Gavin has been courageously fighting for dignity and respect for transgender students and against the school board’s policy that refuses to respect transgender students’ gender identity for the purpose of using the restroom and other facilities, requiring the use of Gavin’s correct he/him pronouns, and signaling his male gender marker on his high school transcript.

The decision concludes: “…The perpetuation of harm to a child stemming from unconstitutional conduct cannot be allowed to stand. These acknowledgements are made in the hopes of making a positive difference to Mr. Grimm and to the everyday lives of our children who rely upon us to protect them compassionately and in ways that more perfectly respect the dignity of every person.”

The lawsuit, brought by the American Civil Liberties Union and the ACLU of Virginia on Gavin’s behalf, yielded a historic victory from the U.S. Court of Appeals for the 4th Circuit (which has jurisdiction over North Carolina, South Carolina, West Virginia, Maryland, and Virginia) in 2016 and eventually reached the United States Supreme Court in 2017 before being sent back to the lower court.

These acknowledgements are made in the hopes of making a positive difference to Mr. Grimm and to the everyday lives of our children who rely upon us to protect them compassionately and in ways that more perfectly respect the dignity of every person.” – Arenda L. Wright, U.S. District Judge

I want you to know that I see you. I hear you. And I appreciate you. You are standing up for not only yourself, but also for the 355,600 transgender youth and young adults in our country. I was one of these young adults not too long ago, and I wish I had someone like you to look to when I was your age. I’m continually amazed by your grace and your ability to walk through this treacherous process with your head held high.

Gavin, thank you for speaking for those who have been unheard and those who are unable to speak up for themselves. You are empowering trans students by showing them that there is another option. We don’t have to remain silent and submit to oppressive policies. We can and must use our voices and stand up for each other now more than ever.