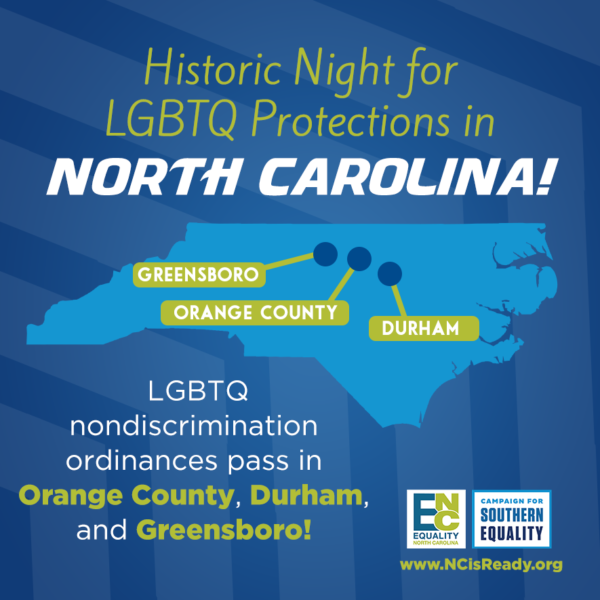 Tonight, the City Councils of Durham and Greensboro and the Board of Commissioners of Orange County voted to pass ordinances that broadly protect members of the LGBTQ community from discrimination. The moves make Greensboro and Durham, the state’s third and fourth most populous cities, respectively, North Carolina’s largest cities to enshrine LGBTQ-inclusive nondiscrimination protections into law.

The victories follow last week’s historic trio of similar ordinances passed in Hillsborough, Carrboro and Chapel Hill. Municipalities regained the freedom to pass such measures on December 1, 2020, following the expiration of a key prong of HB142.

“LGBTQ North Carolinians have the right to dignity, equality, and fairness. Durham’s nondiscrimination ordinance is an important step on the road to the realization of full civil and human rights for LGBTQ people. As a queer resident of this community as well as an elected official, I’m proud to support this ordinance and urge communities across North Carolina to adopt similar legislation.” 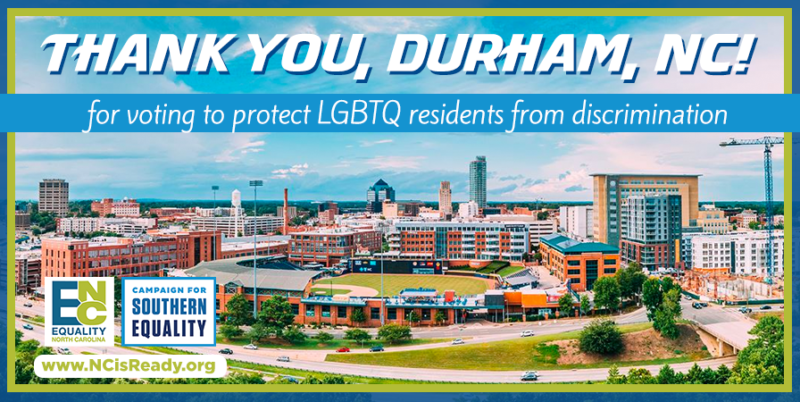 “This has been a monumental week for LGBTQ North Carolinians, who are finally seeing their lives as valuable and worthy of protection by their elected officials. With the rise of white supremacy in this country and the ongoing tumultuous transition of political power, these local protections will prove to be lifesaving mechanisms for the most vulnerable members of our communities in the years ahead. Equality NC eagerly anticipates other cities, towns and counties to follow suit.”

“Government officials in cities large and small – and, this week, counties – are listening to their constituents, learning from the lived experiences of LGBTQ people, and coming to the appropriate conclusion: It’s time to protect LGBTQ North Carolinians from discrimination. This week, as we enter a new political landscape at the national level, we celebrate progress locally and take heart in the hopeful message that tonight’s ordinances send to LGBTQ people not just in Durham, Greensboro, and Orange County – but all across North Carolina, and beyond.”