Tonight the Town Council of Chapel Hill, North Carolina voted to pass an ordinance broadly protecting members of the LGBTQ community from discrimination. The victory comes in the same week that Hillsborough, NC and Carrboro, NC passed similar ordinances. Municipalities regained the freedom to pass such measures on December 1, 2020, following the expiration of a key prong of HB142. 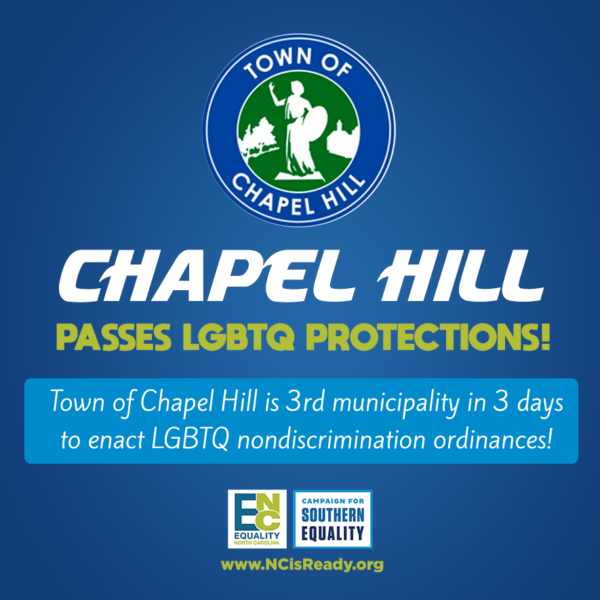 “We have waited for the opportunity to take this important action to help ensure all who live, work, and visit our community can do so free of discrimination based on who they are, what they look like, how they worship, or who they love. This ordinance represents our Town’s commitment to working towards a community that is free from individual and institutional discrimination, where all can thrive.”

“With the backdrop of so much pain this week, North Carolinians have amazingly stepped up and demonstrated that our state is a beautiful place to be LGBTQ. For too long, North Carolina has lagged behind the rest of the nation when it comes to protecting LGBTQ folks and creating a culture where our most vulnerable can thrive. The tides are changing, and we hope other cities and towns across our state will be encouraged by these victories and do the right thing for their own citizens in the weeks ahead.”

“Especially right now, it’s heartening to see these three communities in North Carolina – and more to come next week – reject the politics of division. These ordinances not only establish concrete, clear protections from discrimination but also send a message that everyone deserves respect, dignity, and equality. We applaud the leadership of these lawmakers and cheer on the momentum that these ordinances signal for LGBTQ North Carolinians across the state.”

On Tuesday, January 19, the Orange County Commission and Durham City Council will consider similar LGBTQ-inclusive nondiscrimination ordinances, as momentum for non-discrimination protections continues to build across the state, According to polling, more than 67% of North Carolinians support non-discrimination measures.