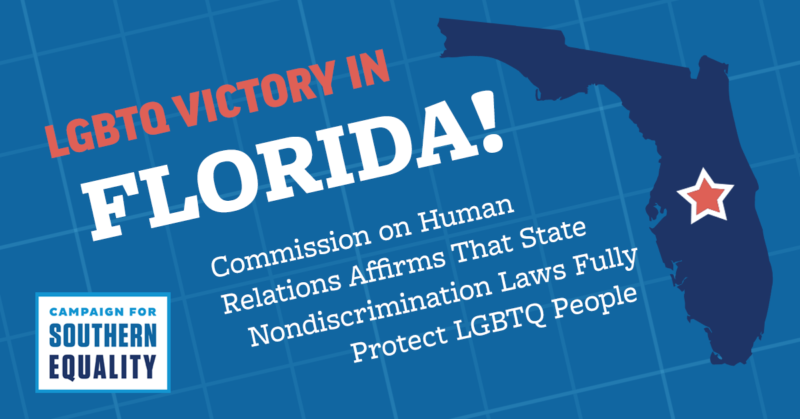 The Florida Commission on Human Relations (FCHR), as a Fair Employment Practice Agency under 29 C.F.R. sections 1601.70-1601.80, investigates employment discrimination under the Florida Civil Rights Act and Title VII, based on race, color, religion, sex, disability, national origin, age, and marital status.  Therefore, the FCHR accepts claims of sex discrimination based on gender identity or sexual orientation for investigation in employment and public accommodations complaints.  Furthermore, the FCHR investigates housing discrimination under the Florida Fair Housing Act and Title VIII, based upon race, color, national origin, religion, sex, familial status, and disability.   The FCHR is committed to investigating housing violations based upon sex discrimination due to non-conformity with gender stereotypes.

The decision is based on the U.S. Supreme Court’s June 2020 ruling in Bostock v. Clayton County. That decision found that federal law prohibiting sex discrimination in employment also protects LGBTQ people because discriminating against someone because of their sexual orientation or gender identity necessarily constitutes discrimination based on sex.

“This is a huge win and cause for celebration statewide. Any LGBTQ person anywhere in Florida who experiences discrimination now has a path to pursue justice. The U.S. Supreme Court declared that discrimination based on sexual orientation and gender identity is illegal and the agency that enforces civil rights protections for all Floridians has made it clear they will follow the law of the land.”

No Southern state other than Virginia and now Florida has explicit statewide nondiscrimination protections for LGBTQ people. Under President Biden’s January 20 executive order, LGBTQ people are protected under federal law from discrimination in key areas of life, including housing, employment, education, and health care. Advocates continue to push toward codified LGBTQ protections, which would make the protections in President Biden’s executive order permanent, modernize them, and update them to include places of public accommodation and federally-funded programs.