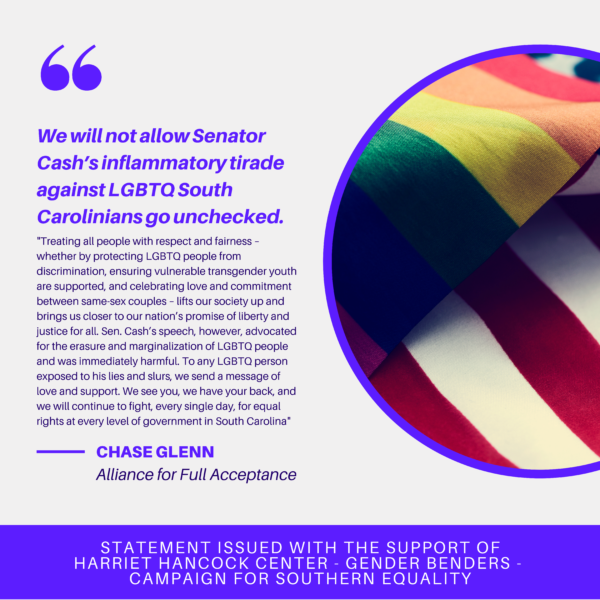 This week on the floor of the South Carolina Senate, during debate of S.1 – the proposed ban on many abortions – Senator Richard Cash (R-District 3) delivered comments attacking the dignity and equality of LGBTQ people across South Carolina. In addition to sharing inaccurate information about abortion rights and reproductive health, Sen. Cash referred to the movement for LGBTQ equality as the beginning of the “downward spiral of our society.” He spoke against the freedom to marry for same-sex couples, fundamental respect for transgender South Carolinians, and basic protections for LGBTQ+ students.

Recent polling shows that 68% of South Carolinians support protecting LGBTQ people from discrimination. And as of 2020, 57% of Southerners support the freedom to marry for same-sex couples.

“We will not allow Senator Cash’s inflammatory tirade against LGBTQ South Carolinians go unchecked – and let me be clear, his words are not just empty vitriol. He has a long history of pushing legislation that would directly threaten the lives and dignity of LGBTQ people in our state. His language and actions only divide our state further, when we should be working harder than ever during this time of national crisis to come together, tackle our shared problems, and build communities where every South Carolinian can thrive.”

“Treating all people with respect and fairness – whether by protecting LGBTQ people from discrimination, ensuring vulnerable transgender youth are supported, and celebrating love and commitment between same-sex couples – lifts our society up and brings us closer to our nation’s promise of liberty and justice for all. Sen. Cash’s speech, however, advocated for the erasure and marginalization of LGBTQ people and was immediately harmful. To any LGBTQ person exposed to his lies and slurs, we send a message of love and support. We see you, we have your back, and we will continue to fight, every single day, for equal rights at every level of government in South Carolina.”

If you are in crisis, please click here to learn more about resources available to you.