Historic SCOTUS ruling will guarantee more than 5 million LGBTQ Southerners workplace protections, more vital than ever as millions of Americans face unemployment in the wake of the COVID-19 pandemic

Today the United States Supreme Court affirmed in a 6-3 ruling written by Justice Neil Gorsuch that Title VII of the Civil Rights Act of 1964, which prohibits discrimination based on sex, also protects people who are fired because of their sexual orientation or gender identity. The court’s decisions in three related cases are available here. 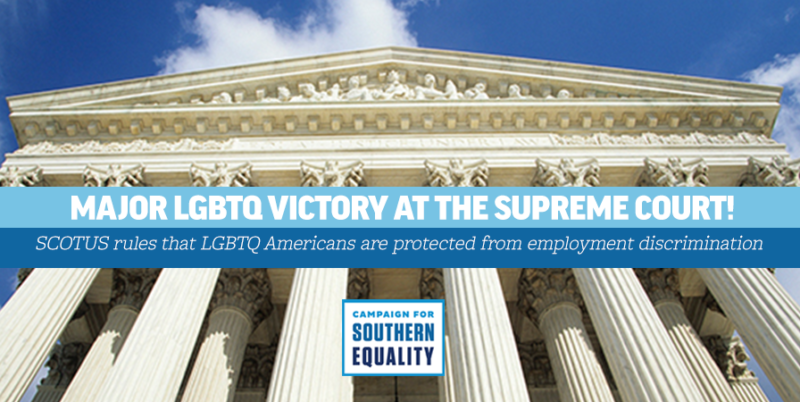 “Today is a historic day: The U.S. Supreme Court has recognized the fundamental equality of LGBTQ Americans, including the more than 5 million who live in Southern states. The ruling ensures a blanket of employment protections for LGBTQ people rather than the inadequate patchwork that has all but stopped at the borders of Southern states. For LGBTQ Southerners, the decision shows yet again that that no one should face discrimination because of who they are or who they love.”

“The decision comes at a time when millions of Americans are facing unemployment or reduced employment because of the COVID-19 pandemic. As LGBTQ people venture back into the job market, we’re grateful for this measure of relief: The legal protection that employers can no longer use anti-LGBTQ bias as a weapon in the workplace.”

“While we’re grateful for this step forward, we all must remain committed to this month’s deepened and long overdue conversation around racial injustice. We lift up the reality that Southerners with multiple marginalized identities face multiple layers of oppression. Black LGBTQ Southerners, for example, not only confront employment discrimination but also police brutality, anti-Black racism, and disproportionate rates of living with HIV. As we celebrate today’s ruling, we must continue to push for dignity, respect, and justice for all LGBTQ people in every sphere of life.”

Based in Asheville, NC, the Campaign for Southern Equality works for full LGBTQ equality across the South. Our work is rooted in commitments to equity in race, gender and class. www.southernequality.org