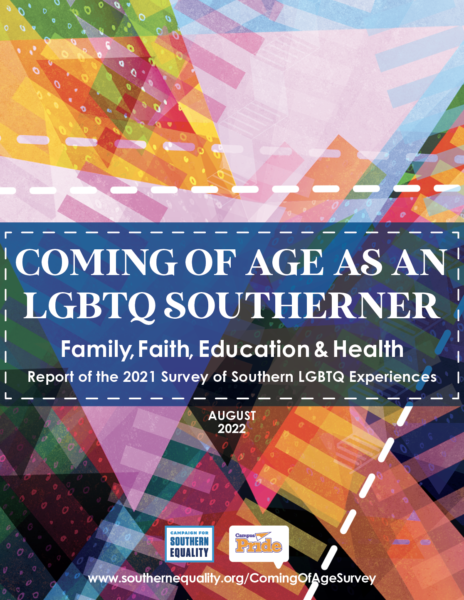 Today the Campaign for Southern Equality (CSE) and Campus Pride released Coming of Age as an LGBTQ Southerner: Family, Faith, Education & Health, a report detailing the findings of the 2021 Survey of Southern LGBTQ Experiences, a survey of 4,186 LGBTQ people who live in the South. Click here to read the full report.

The report highlights the experiences of LGBTQ Southerners as they have come of age. A majority of respondents are in the 18-24 age group and offer new insights into the experience of young LGBTQ adults who came of age during a time of historical cultural and social progress paired with heightened and organized aggression aimed at queer and trans people.

Participants report rejection, bullying, and violence as a result of their gender identity or sexual orientation; have sought and been denied resources or support from parents, teachers, coaches, and faith leaders; are coping with experiencing pressure from a variety of authority figures to change or suppress their LGBTQ identity; and are simultaneously experiencing poor physical and mental health, including heightened suicidality.

“Unfortunately, the dominant narrative emerging from these data is that thousands of individuals throughout the South are not getting the social support they need and deserve at home, in schools, and in their communities. This lack of support and inclusion is disempowering and may cause detrimental harm to their mental and physical wellbeing, especially when that lack of support gets compounded with clear, state-sponsored discrimination such as the passage of anti-LGBTQ laws.”

“Right now the sad reality is that many young LGBTQ+ people are experiencing a lack of acceptance at home and in their faith communities – and it’s especially troubling that younger people are often perceiving and receiving less emotional, mental, and physical support and resources than older respondents. Young LGBTQ+ people are being forced to conjure immense strength and resilience to combat marginalization and isolation – and it’s vital that we do everything we can, on every level of society, to support and affirm them for being who they are.”

The self-administered online survey, developed in 2021 by a team of sociologists, political scientists, and community organizers, was completed by 4,146 LGBTQ Southerners between August 3 and December 20, 2021. The survey included demographic questions as well as questions related to home and family, faith and spirituality, school and education, and health and well-being. The survey was available in both English and Spanish. Recruitment took place online through targeted social media advertisements. The team also hired community research ambassadors to promote the survey to LGBTQ people in their networks throughout the region.

Coming of Age as an LGBTQ Southerner is available at www.southernequality.org/ComingofAgeSurvey.