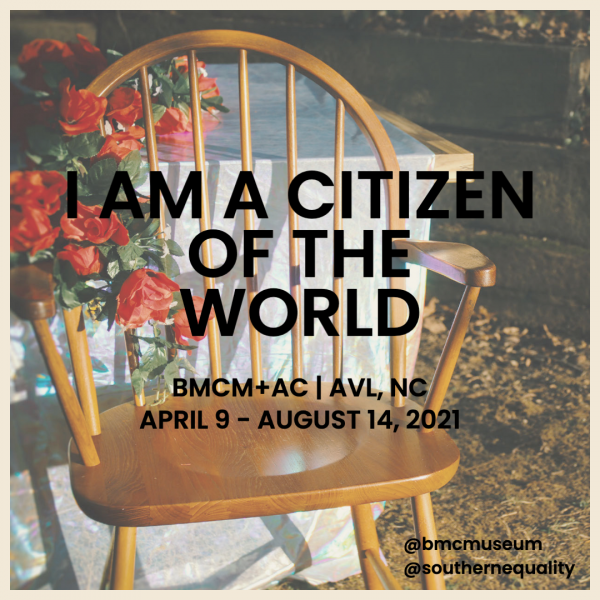 Through video and photographic work, entitled Building a Better Table and You’re Welcome (commissioned by BMCM+AC), Williams and Murray invite the viewer to explore their role in taking or having a ‘seat at the table’ – that is, how we use our voices and positions to enact social change. The work encourages viewers to acknowledge how their own place in the world may relate to the representation and liberation of BIPOC and queer people.

The multimedia piece Building a Better Table allows viewers to literally take a seat in front of a printed work and video. When the viewer sits, they activate the reveal of a series of words and images in a scene of a table presided over by models Quay Mills and Sage Jean, who wear shirts emblazoned with the words “You’re Welcome,” which nudges viewers to acknowledge labor performed for their benefit and also serves as a cordial invitation to join in the work for social change. The viewer is guided a step further by being encouraged to create their own calls to actions and sharing these aspirations as a promise to themself as well as to their community.

“Being a global citizen means becoming aware of the wider world and our place in it, and these works point to that awareness in two distinct ways: first, to respond to the mainstream exclusion and erasure of BIPOC trans and queer voices, and second, to hold audience members accountable for their own complacency and demand their commitment to address those exclusions. We’re grateful to Black Mountain College Museum + Arts Center for the opportunity to share this message in this exhibition, and we’re looking forward to a spring and summer season of inviting everyone to help build a better table so we all have an impactful seat.”

I AM A CITIZEN OF THE WORLD will be available to view from April 9 – August 14, 2021. Learn how to make an appointment here.