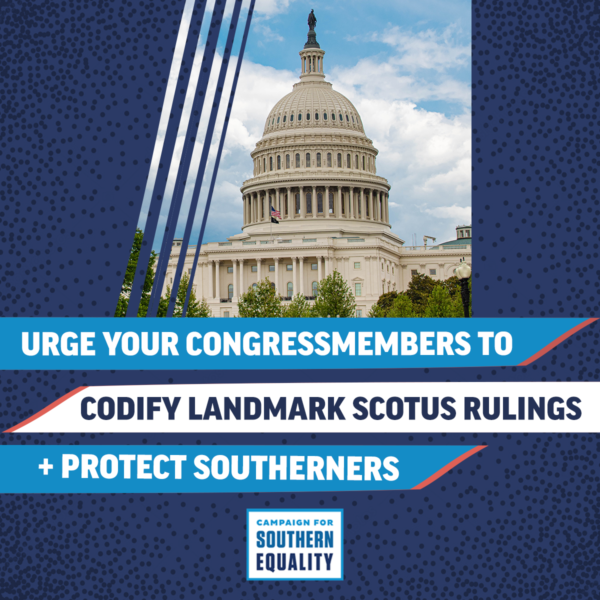 The U.S. Supreme Court ruling overturning the constitutional right to abortion is already rippling across our country and the lives of millions of people in harmful ways. As abortion bans go into effect across the South, we are working with partners on the ground to support efforts to ensure people have access to the health care they need and deserve.

We are also preparing for what comes next. The Dobbs ruling is the starkest signal yet of the powerful forces who remain focused on undoing decades of progress, no matter the cost. Justice Clarence Thomas, in his concurring opinion in the case, directly invited opponents of LGBTQ+ equality to bring forward cases to overturn historic rulings such as Obergefell and Lawrence.

We know that the South, which is home to one third of LGBTQ Americans, is poised to become the epicenter of the next focused wave of attacks on our legal rights. Our region has long been used as a laboratory for the most extreme policies, from HB2 in NC to state action in TX that criminalizes parents for ensuring their children have access to gender affirming health care.

Simply put: your zip code should not determine your rights in America. Yet this is the reality for LGBTQ people in the South.

LGBTQ+ Southerners require federal action from the United States Congress – we will be targeted again and again by state legislators, and we cannot risk this extreme Supreme Court revisiting important victories to further marginalize our community.

That’s why we’re calling on the U.S. Congress to take action – now – by codifying the landmark Supreme Court victories that Justice Thomas and others are threatening to undo. As we continue to call for passage of the Equality Act and other high-priority legislation for LGBTQ+ people, Congress should at the very least codify into federal law the Supreme Court victories in Lawrence v. Texas (prohibiting state intervention in consensual intimate relationships), Obergefell v. Hodges (guaranteeing the freedom to marry for same-sex couples), and Bostock v. Clayton County (determining that anti-LGBTQ+ employment discrimination violates federal law). Congress should also take action by codifying Roe v. Wade (the constitutional right to abortion), Griswold v. Connecticut (the right to contraception), and Loving v. Virginia (the freedom to marry for people of different races).

Can you take action by urging your Senators and Representative to take action and codify these protections into federal law? Use the tools here to send a quick letter – it only takes a minute.

Thank you for joining us in this action. We will be rolling out actions, resources and programs to support our community every step of the way – stay tuned for more updates.