Today the Campaign for Southern Equality (CSE) released the 2021 edition of Trans in the South: A Directory of Trans-Affirming Health & Legal Service Providers. Nearly 400 providers from across the South – including primary care physicians, mental health providers, lawyers, endocrinologists, HIV care providers, reproductive health experts, and more – who report being trans-affirming are included in the guide. The site also includes information about insurance coding; additional national, regional, and state directories; and resources to assist with funding medical transition. 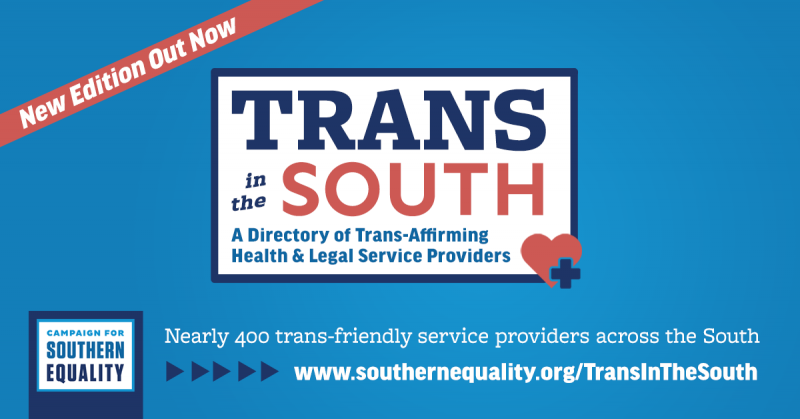 View ‘Trans in the South’

The guide, which CSE has published since 2016, has been upgraded to be digital and interactive, with new features allowing users to easily search for providers and filter by their specific location and needs. Since 2016 more than 50,000 users have sought support from the guide.

The Trans in the South guide is premised on the principle of trans people sharing resources to help each other find the services they need. A Research & Development team of trans leaders from across the South played a leadership role in expanding the guide, drawing on their community expertise and lived experiences. Read more about this year’s Research & Development team here.

“We believe that every transgender person – no matter where they live – should be able to access the health care, medical services, and legal support they need to lead healthy lives where they can thrive. But the reality is that accessing friendly and affirming medical providers, therapists, and lawyers can be difficult as a transgender Southerner. That’s the genesis for the Trans in the South guide, and it’s why we update it year after year. With this new interactive edition, the guide will be updated on a rolling basis, with new providers added as folks across the South contribute knowledge and experiences to the resource.”

The update to the Trans in the South guide is being released against the backdrop of states across the South and nation considering discriminatory legislation targeting transgender people. Some of the bills would specifically ban medical providers from providing affirming medical care to transgender youth, while others would grant medical providers a “license to discriminate” against LGBTQ people and others.

Last month the governor of Arkansas, for example, signed into law SB289, which allows doctors and other healthcare professionals to cite their religious or moral objections to justify turning away patients. Other Southern states, from North Carolina to South Carolina to Texas, are considering similar bills.

Even without laws like these, however, transgender Southerners already report high rates of encountering discomfort, discrimination, and ignorance while seeking medical care. According to responses from the Campaign for Southern Equality’s 2019 Southern LGBTQ Health Survey:

Allison Scott, Director of Impact & Innovation at the Campaign for Southern Equality, said:

“In a perfect world, trans and queer people would not need a guide like Trans in the South. But right now, the hostile climate that persists in many parts of the South means trans people often must take extra steps or travel hours to protect their rights and access basic health care and services. As we keep up the fight to defeat discriminatory laws and educate more providers, the Trans in the South guide helps transgender people connect with providers who will offer the care they need and deserve. It also means people don’t have to go through the difficult experience of cold calling providers to find out if they will be served.”

The Trans in the South guide is a pillar of the Campaign for Southern Equality’s Community Health Program, which works toward ensuring that every LGBTQ person in the South can access LGBTQ-friendly health care and legal services, and support services locally. Through Pop-Up Clinics, our Southern LGBTQ Health Initiative (a partnership with Western NC Community Health Services), and continuing education trainings, we’re working to serve transgender and queer people across the region.