Today the U.S. Department of Health and Human Services announced a new rule change that removes language explicitly protecting transgender people from discrimination in healthcare programs and activities. Earlier this month, the Administration also granted workers in the health sector the ability to refuse care that may conflict with their religious or moral beliefs, opening the door to further discrimination against LGBTQ people and others. 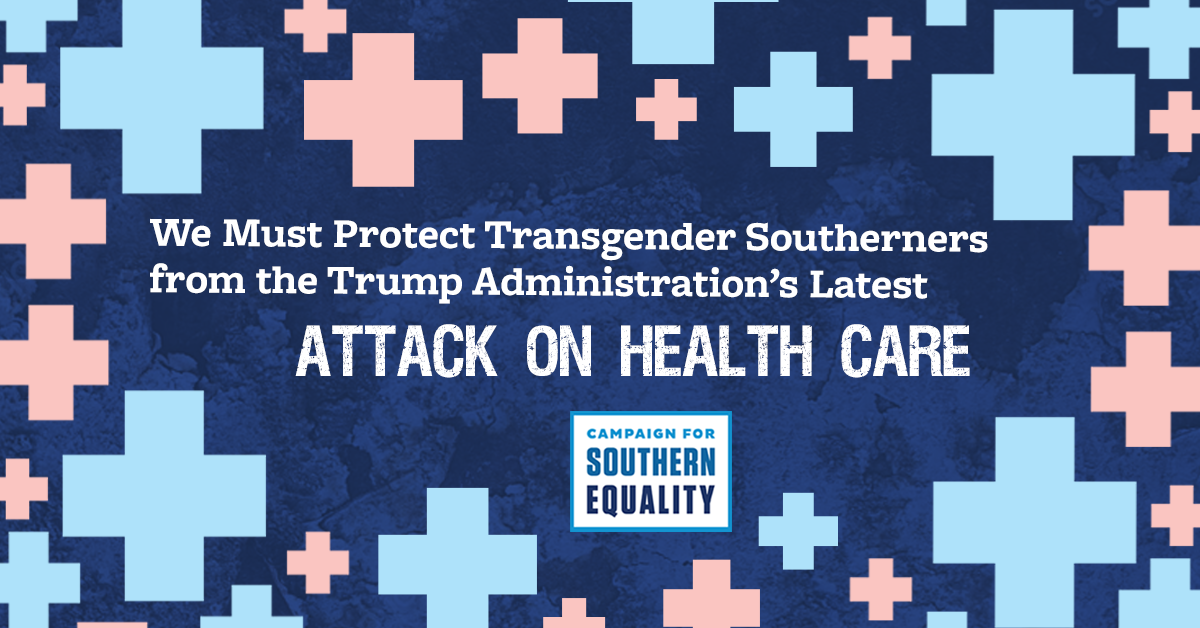 “At least half a million transgender people call the South home, and every year, far too many struggle to find health care professionals that will competently treat them with dignity and respect. But the brazen disregard for trans people’s health in the Administration’s new rule change underlines this disparity in bold black paint and gives discrimination a blanket thumbs-up. This policy is not just a step in the wrong direction – it’s a hard shove off the map, the latest attempt by this Administration to deny humanity to transgender people.”

“The policy exacerbates the need for trans Southerners to keep doing what we have been doing for years: Find ways to bridge the gap between the care that we need and that which is available right now in our communities. We’ll continue to do that in pursuit of our goal to build a South where transgender people can access their basic human rights – including their right to health care – without leaving their hometowns, no matter where they live.”

Nationally, data suggests that approximately 25 percent of transgender people do not seek health care at all because of a fear of discrimination. It’s part of why the Campaign for Southern Equality maintains Trans in the South: A Guide to Resources and Services, a vetted directory of more than 400 trans-friendly service providers – including primary care doctors, attorneys, counselors, endocrinologists, and more – across 13 Southern states. The guide is available in English and Spanish here.

At the beginning of 2019 the Southern LGBTQ Health Initiative, a collaboration between the Campaign for Southern Equality and Western North Carolina Community Health Services (WNCCHS), released a report that captured trans and nonbinary Southerners’ experiences accessing health care. The groundbreaking report featured conclusions from the Trans Health Focus Group Project, which included the voices of nearly 50 trans and nonbinary people from six Southern states. The report, available here, provides qualitative data on the many roadblocks trans Southerners face when seeking health care.