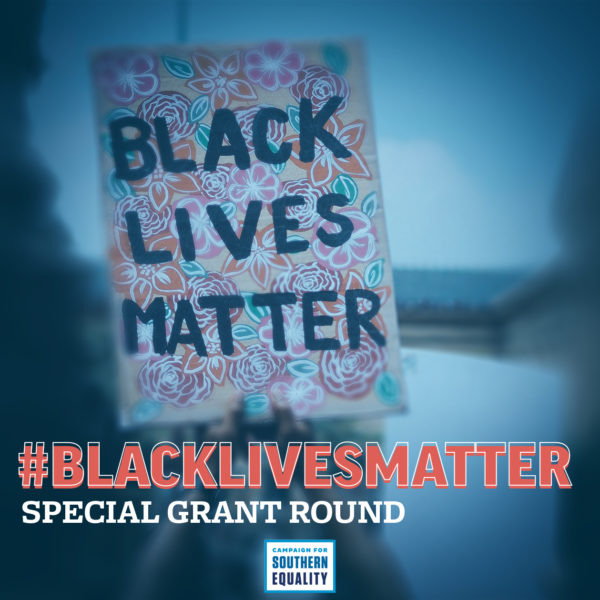 This week the Campaign for Southern Equality (CSE) opened a special grant round dedicated to resourcing and celebrating the Black-led organizing across the LGBTQ South. Grants of up to $1,000 will support Black LGBTQ organizers leading projects such as direct action, resilience and healing efforts, direct service, artistic endeavors, and bail-out funds, across the South.

This is CSE’s second #BlackLivesMatter Southern Equality Fund grant round in 2020. In June we distributed $6,000 through 11 grants. Funded projects in the first round included The Box Breakers; House of Pentacles; Louisville Community Bail Fund; Make Lemonade Doulas Services; One Mic, One Voice; THE PAIGE Inc.; S.O.U.L. Sisters Leadership Collective; The Strilite Foundation Inc.; Strive Till I Rise; and Trans(forming). Anyone is welcome and encouraged to nominate a Black-led project for a grant and organizers may also nominate themselves. Click here for more information and for the simple nomination form.

This Southern Equality Fund grant round is supported by a generous donation from East Fork Pottery. This summer East Fork Pottery donated a portion of sales from their new Lapis glaze to CSE, and in June the company hosted an online auction featuring artists, chefs, and makers who donated their time, talents, and art. CSE will put East Fork’s entire donation to work to support BIPOC-led organizing and people across the LGBTQ South.

“As a founding team, Alex, John, and I see our business as the most readily available platform from which we can contribute to a liberated future. As our company’s reach has grown, so too has our ability to communicate emergent strategies for more equitable ways of doing business. So too has our ability to put money in the hands of educators, leaders, and organizers for justice. It has been a true privilege to be in ever-deepening community with the Campaign for Southern Equality. To join their leadership team on panels, to walk alongside them in protest, host parties together, share ideas, cry, laugh, scream—all of it. To be anchored by the belief in a shared vision for the future. We see with our own eyes the impact of CSE’s fight for legal and lived equality for LGBTQA+, BIPOC Southerners. We are so grateful to be able to support this work and we know that there’s so much more to be done. We trust that our friends at CSE are heels down, hearts open, and in it for the long haul.”

As a founding team, Alex, John, and I see our business as the most readily available platform from which we can contribute to a liberated future. As our company’s reach has grown, so too has our ability to communicate emergent strategies for more equitable ways of doing business.” – Connie Matisse, East Fork Pottery

Funds from East Fork Pottery will also support the next round of CSE’s COVID-19 Rapid Response Grant Program, through which the organization has quickly routed more than $170,000 to LGBTQ Southerners experiencing the health and financial impacts of the COVID-19 pandemic. The majority of the funding from the program has supported Emergency Assistance Grants, grants of $100 that go directly to individuals and families. The application for the next round of Emergency Assistance Grants will open later this week.

“Black organizers are doing transformative work across the LGBTQ South to fight for racial justice, celebrate Black lives, and support healing and resilience. At a time when our nation is engaged in a long overdue reckoning around dismantling white supremacy, it’s critically important that Black organizers – especially in the South – have the funding they need to sustain their work and themselves.”